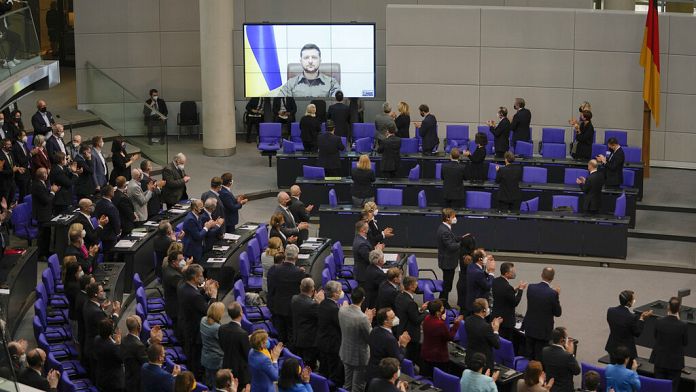 Ukrainian President Volodymyr Zelensky on Thursday urged Germany to cut down the new “Wall” erected in Europe against freedom since the Russian invasion of Ukraine, drawing a parallel with the former Berlin Wall.

“Dear Chancellor (Olaf) Scholz, tear down this Wall, give Germany the leadership role it deserves“, launched the Ukrainian leader who addressed by videoconference to the lower house of the German parliament.

He thus drew a parallel with a historic speech by American President Ronald Reagan, who had launched in 1987 from the Brandenburg Gate in Berlin to the leader of the Soviet era Mikhail Gorbachev: “Destroy this Wall” (“Tear down this wall” ). Two years later the Berlin Wall fell.

The German Chancellor then hailed the “hard-hitting lyrics” of the Ukrainian president, without responding directly to Mr. Zelensky’s requests. “We see it well: Russia continues its cruel war every day, with terrible losses“, lamented on Twitter the successor of Angela Merkel.

“We feel compelled to do everything in our power to give diplomacy a chance and end the war.“, concludes the head of the German government.

Like the day before before the American Congress, the Ukrainian president received a standing ovation from the Bundestag, before his ten-minute speech. If he failed to convince NATO to establish a no-fly zone over Ukraine, Volodymyr Zelensky finally obtained on Wednesday from Joe Biden 800 million dollars in military aid, as well as deliveries of systems air defense and drones.

Moscow reacted strongly through Maria Zakharova, spokesperson for the Ministry of Foreign Affairs, herself affected by the sanctions imposed by Western countries:

“These statements are extremely dangerous, and these supplies, as already mentioned by representatives of the presidential administration, will become a destabilizing factor that will not bring peace to Ukraine. But in a long-term perspective, can have more dangerous consequences” she said at a press conference which was held at the same time as Zelensky’s speech in the Bundestag.

The spokeswoman for Russian diplomacy also denied that civilians had been targeted by the Russian army in Ukraine.

Mr. Zelensky deplored, since the Russian invasion, the erection of a new “Wall” in Europe. “This is not a Berlin Wall but a Wall in Central Europe between freedom and servitude and this Wall is getting bigger with each bomblaunched on a Ukrainian city, underlined the Ukrainian president.

“Every year, politicians repeat + never again +. And now we see that these words are simply worthless. A people is being destroyed in Europe“, warned Mr. Zelensky, according to which 108 children were killed in Ukraine since the beginning of the offensive. “Help us to stop this war”.

The Ukrainian president regretted in his speech the close economic relations forged in recent years between Berlin and Moscow, in particular in the energy field.

“Dear German people, how is it possible that when we told you that Nord Stream 2 (a gas pipeline project between Russia and Germany) is a kind of preparation for war, we heard like answer + it’s purely economic, it’s the economy, the economy +?“, he launched.

These projects led by Germany and Russia, “it was the cement for the new Wall“, lambasted Mr. Zelensky.

“For some it’s politics, but it’s also stones, it’s stones for the new Wall“, he hammered.

Ukraine has been opposed from the start to the Nord Stream 2 gas pipeline linking Russia and Germany, which was finally suspended when Vladimir Putin recognized the autonomy of the pro-Russian Ukrainian provinces.

The Ukrainian regime has also been urging Germany for many weeks to deliver weapons, which Berlin finally conceded after the Russian invasion launched just three weeks ago.

But the government of Olaf Scholz continues to oppose a boycott of the import of Russian gas and oil, which kyiv would like.

In Memphis, Starbucks fires employees who sought to unionize

Vladimir Putin “ill-informed” on the course of the war in Ukraine, according to Washington