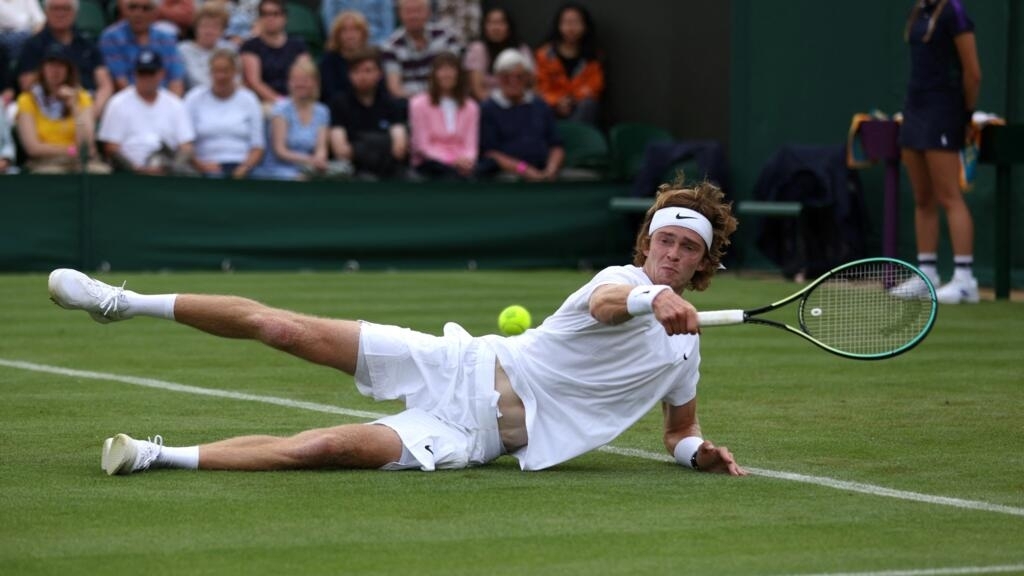 Russians and Belarusians are not welcome at Wimbledon due to the invasion of Ukraine, the Grand Slam tournament organizer said on Wednesday. World No. 8 Andrey Rublev called the decision “completely discriminatory” as the WTA considers sanctions against the British tournament.

Did the prestigious Wimbledon tournament go further simply banishing the Russians and Belarusians after the invasion of Ukraine? The decision causes an outcry among the main concerned but is also criticized by Elena Svitlona, ​​one of the most loquacious voices of the circuit against this war. The WTA is considering sanctions against the British Major.

Russian Andrey Rublev, world No. 8, said on Thursday April 22 that the exclusion was “totally discriminatory”:

“The reasons they (Wimbledon, editor’s note) gave us had, how to say, no sense, they were not logical”, he declared on the sidelines of the ATP 250 tournament in Belgrade he is playing this week. “What is happening now is totally discriminatory against us,” he continued. “It will not change anything,” also assured the player, who had written “No war please” on a television camera during the Dubai tournament just after the Russian invasion of Ukraine.

“Giving the tournament prize money to humanitarian aid, to families who are suffering, to children who are suffering, that’s something that would have a bit of an impact,” he suggested to the organizers of the London tournament, who handed out a total of £35m in winnings last year (equivalent to €42m). “In that case, tennis would be the only sport to give away such an amount, and it would be thanks to Wimbledon, who would get all the glory.”

His compatriot Karen Khachanov, 26th player in the world who qualified Thursday evening for the semi-finals of the Belgrade tournament, declared himself “very sad, disappointed and devastated that these things are happening”, he who considers that Wimbledon is “the ‘one of the most beautiful tournaments in the world’.

In a statement released Thursday evening, the Belarusian Tennis Federation (FBT) “categorically condemns the decision taken by the Wimbledon organizers to suspend Belarusian and Russian players”. “Such destructive acts do not contribute anything to a resolution of conflicts, but only incite hatred and intolerance on a national basis”, she continues.

The FBT adds that “consultations are underway with international legal firms specializing in sports law” and that “a strategy is being developed aimed at protecting, above all, Belarusian tennis players worldwide” .

In addition to these logical reactions of those concerned, other voices have condemned the decision. Starting with the Ukrainian player Elina Svitolina, one of the most vocal voices to demand sanctions since the start of the war.

“We don’t want them to be totally excluded,” said the former world No. 3, semi-finalist at Wimbledon in 2019, interviewed Thursday by the BBC. “If players don’t speak out against the Russian government, it’s normal to exclude them. We want them to speak up, to say if they are with us and the rest of the world or with the Russian government “, she argued. “That for me is the main point. If they didn’t choose this, if they didn’t vote for the (Russian) government, it’s right that they are allowed to play.”

In a press release posted on his social networks, Billie Jean KingAmerican tennis legend with 12 Grand Slam titles, including six at Wimbledon, observes that “(she) cannot support the exclusion of individual athletes from any tournament on the sole grounds of their nationality. “.

Wimbledon management announced on Wednesday the exclusion of Russian and Belarusian players from its 2022 edition due to the war in Ukraine, a decision hotly contested by the ATP and WTA. As it stands, neither the Russian Daniel Medvedev, world n°2 who is recovering from an operation for a hernia, nor the Belarusian Aryna Sabalenka, world n°4 and semi-finalist last summer in London, will be able to defend their chances in the temple of lawn tennis (27 June – July 10).

The four Grand Slam tournaments (Australian Open, Roland-Garros, Wimbledon and US Open) are independent of the men’s and women’s circuits, where Russians and Belarusians are still allowed to participate in the tournaments, under a neutral banner. And the ATP described on Wednesday as “unfair” the decision taken by Wimbledon, especially since it extends to all the grass tournaments this summer in Great Britain, in particular Queen’s and Eastbourne, yet under the aegis of the ATP. The WTA also declared itself “very disappointed” with the announcement made by Wimbledon, which it considers “neither fair nor justified”.

According to the sports daily L’Équipe, the leaders of the WTA are considering sanctions against Wimbledon and the LTA, the English Tennis Federation.

“These decisions are a violation of the rules of the Grand Slam and the WTA”, explains Steve Simon, the boss of the WTA in an email to the players obtained by the French newspaper. “We have formally reported our position to them reserving the right to impose appropriate sanctions, which may include (amongst other things) withdrawal of ranking points awarded at Wimbledon, fines and suspension of membership. from the WTA and from the LTA to the WTA. The Tournament Directors’ Council, the Players’ Council and the WTA Board will meet in Madrid to define these sanctions.”

Liverpool-Real Madrid delayed after tensions around the Stade de France

spain brings Italy back to earth and qualifies for final

follow live the draw of the World Cup in Qatar