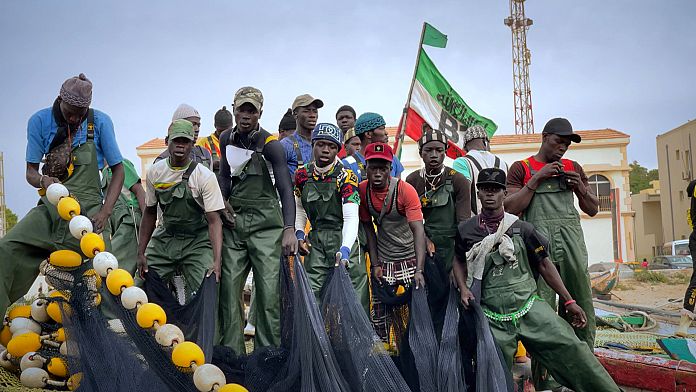 Developing prosperity and preventing illegal immigration are among the topics on the agenda of the European Union-African Union summit on 17 and 18 February 2022 in Brussels.

In this edition of euronews Witness, journalist Valérie Gauriat takes us to Senegal to see how these two topics are intertwined. She went to Saint-Louis, a high place of fishing where professionals face a depletion of fishery resources. While many of them accuse the fisheries agreement between the European Union and Senegal jeopardize their means of subsistence, the crisis pushes many young people to reach Europe illegally.

When I arrive in the coastal city of Saint-Louis after a four-hour drive from Dakar, the capital of Senegal, I can’t help but smile, eager to discover what this city looks like today. The memories of my previous visit, some twenty years ago, to this mecca for tourism and fishing, are still vivid in my mind. I remember the countless multicolored canoes landing on the sun-drenched white sand shore of the Atlantic coast, dozens of crews of proud Lebou fishermen, the most famous in Senegal, landing boxes filled to the brim with fish, but also women followed by hordes of happy children, jostling to get their share for processing or local sale.

But these scenes now belong to another time. Eroded by erosion and covered in rubbish, the Langue de Barbarie sandstrip has since been deserted by fishing boats which now land their catches on the banks of the Senegal River.

The restlessness is still there, but the joy I witnessed so long ago has been replaced by anger. “The fish is rotten, the foreign boats are polluting the sea,” a fishmonger exclaims, waving desperately small fish in front of my camera.

“We leave as we came, with nothing!” launches another at her side, showing us the empty buckets that she will take home.

“These are the agreements that scrape all the fish”

Resource depletion is blamed on foreign fishermen: “Their boats interfere with fishing, they pollute the sea and catch everything we used to catch,” says Kala, a fishing boat captain, before boarding his canoe with his crew. Moustapha Dieng, retired fisherman and local hero, listens to us. He leads two unions of traditional fishermen.

As he denounces the illegal practices of many Chinese ships operating in the area, he is even more furious about what he believes to be the harmful effects of the fishing agreement between the EU and Senegal which allows European vessels to fish for tuna and hake beyond the 6 nautical mile (12 km) zone reserved for traditional fishing.

“Europeans who are in the tuna fishery are forced to come and buy or catch juvenile fish that were to grow to repopulate the oceans to serve as live bait,” he explains. “Vessels that fish for hake do bottom trawling, but this practice is prohibited in Europe!” he protests. “It is these agreements that scrape all the fish and create unfair competition with artisanal fishing!” he growls as the group of fishermen beside him nods unanimously.

The day after our first meeting, I find Captain Kala, back from his trip to sea. You can read the exhaustion in his eyes as in those of his crew. “Nothing, there is nothing,” he laments. “There were a lot of boats not far from us: Spanish and Chinese ships. They are there, 7 km from the coast, it is not normal for them to pass by,” he points out.

“Some of our children have arrived in Europe, others have not”

The situation is just as tense for Amina, who works in traditional fish processing. She and her relatives settled in Saint-Louis after leaving their crisis-hit fishing village, a six-hour drive away, in the hope of finding a better life there. In vain.

“Apart from today, in two months we haven’t been able to process any fish, we’re so tired,” she specifies. “If it was up to us, we would seek help against these boats so that we stop them and do everything so that we can have fish: there are no more fish,” she says before adding: “We even sent some of our children by canoe to Europe. Some went to Spain. Some arrived and others did not.”

A shadow passes over his face. Three of his sons are gone. Only one managed to win Spain. Another is missing. Four months ago, she learned that a third had died at sea.

“No competition” according to EU

“The second thing that must be said is that the species in question – hake, tuna – are species that are not species fished by Senegalese artisanal fishermen, so there is no no competition,” she insists.

Arguments that do not convince the fishermen of Saint-Louis. The young people I meet are categorical. “Once you have sold the fish, there is almost nothing left, no profit! And we have no other job. Since we were little, we have only known the sea, we only depend on it, “ launches a young man. “No one will stay here, we will all go to Spain!” he promises angrily. His friends around him immediately do the same.

Private sector employment programs supported by the European Union aim to provide an alternative to growing number of young candidates for European exile.

Abibou Ka recruited several of them after taking them on internship at his restaurant called Darou Salam. This energetic and jovial entrepreneur is convinced that it is in their country that young people can build their future. “What we want is to pass on what we have to young people, so that they have this will so that tomorrow they can do something,” he assures.

A dream shared by Younouss, one of his protégés whom he appointed sous-chef of his restaurant. He is one of many young people who tried to reach Europe by boat before being picked up by the coast guard. A chance, he recognizes today.

“I have friends, last year, who capsized, it was very hard at that time,” he remembers with sadness. “I have no regrets because now I live my life, I have plans to have something that is mine,” he points out.

Having something of one’s own is still a chance reserved for a minority of young people in Saint-Louis. It is for this reason that Kala, the captain, a solid and calm 30-year-old, tells me that he makes sure that all his children go to school. He does not want them to follow the family tradition and become fishermen, nor to apply the watchword in Wolof that I have heard in the mouth of all those who dream of joining Europe: “Barça mba barzakh “, “Barcelona or death.”