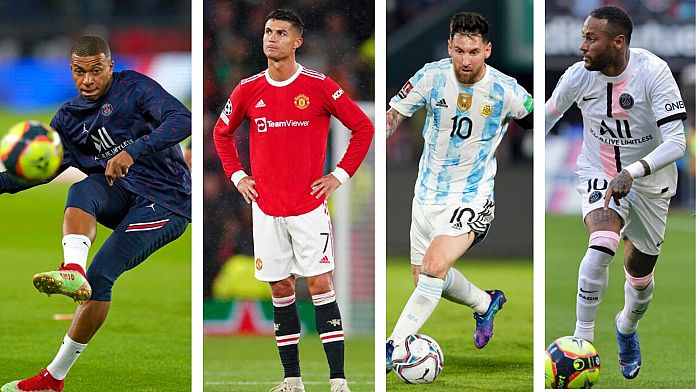 After a year 2020 without winners due to competitions truncated by Covid-19, 30 players and 20 players are again in contention for the Ballons d’Or, designated by a panel of international journalists and which will be awarded on November 29 at the Théâtre du Châtelet in Paris.

The star recruit of Paris SG Lionel Messi, winner of the Copa America this summer with Argentina, rubs shoulders in the list of his club teammates Kylian Mbappé and Neymar, semi-finalists of the C1.

Winner of the Champions League with Chelsea, crowned European champion with Italy and already crowned UEFA player of the year, the midfielder Jorginho is obviously present. His French teammate N’Golo Kanté, voted man of the match in the semi-finals and final of C1, is also in the list.

Five-time trophy winner and third in 2019, Cristiano Ronaldo does not miss the call and finds at his side his former teammate of Real Madrid Karim Benzema, centerpiece of the Merengues and back at the Blues. On the other hand, Antoine Griezmann, another striker of the French team, is not on the list.

What about female footballers?

On the women’s side, the 2019 winner, the American Megan Rapinoe, eliminated in the quarterfinals at the Tokyo Olympics, does not appear in the nominees unlike the Canadian Christine Sinclair, Olympic champion.

FC Barcelona, winner of the women’s C1, is present in force with in particular Alexia Putellas, already awarded UEFA Player of the Year and Jennifer Lester, co-top scorer of the C1.

Three French women are on the list: the captain of Lyon and Les Bleues Wendie Renard and the Parisiennes Marie-Antoinette Katoto and Kadidiatou Diani, champions of France and semi-finalists of the Champions League.

In addition, ten goalkeepers will compete for the Yachine Trophy. Among them PSG goalkeepers Gianluigi Donnarumma, European champion with Italy (also in the list of the Ballon d’Or), and Costa Rican Keylor Navas, as well as Senegalese Edouard Mendy, winner of the C1 with Chelsea

Spain’s Pedri, England’s Jude Bellingham, Mason Greenwood and Bukayo Saka, Germany’s Jamal Musiala, Belgium’s Jérémy Doku (Rennes) and Portugal’s Nuno Mendes (PSG) are among the contenders for the Kopa Trophy, which rewards the best player under the age of 21.