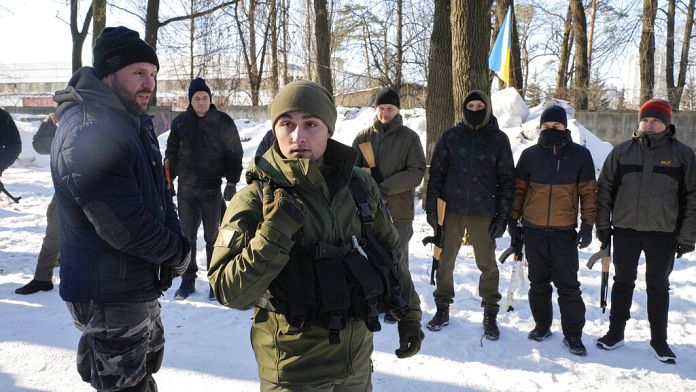 Since Russia started positioning its troops near the border with Ukraine. Volunteer fighters come from all over the world to lend a hand in Kiev.

Among them is young American Justin Dee who has traveled thousands of miles from his New York home to join a war he believes could have global implications.

“I have been following this conflict since 2014 when the Russians illegally annexed Crimea and since then I see them gradually interfering in the affairs of other countries, sticking their noses everywhere. Since then it has intensified and I think it is about to start again. So I thought I should come here to help the people of Ukraine,” explains Justin Dee.

A presence that is not official

Justin Dee is not among the 3,000 American soldiers promised by President Joe Biden. His presence here is not official.

“Today Ukraine is the front line of the struggle for democracy, the fight for Western ideology. I think that if Russia succeeds in subjugating Ukraine, they will not stop there, they will will continue until they subvert and manipulate all world leaders and make them their puppets. And I’m here to stop that.” says Justin Dee.

Like other volunteer soldiers, Justin Dee joined a unit of foreign fighters present in Ukraine since 2014: the Georgian Legion.

A renewed interest in Ukraine

With the renewed tension, the legion began to attract new candidates again.

“A week ago, we started a new recruitment process for foreign soldiers. At the moment, there are a lot of people applying, and with more than 300 applicants, Georgia is once again the first. come the Americans, then we have the British, the Australians, the Italians and the Germans… Currently it is mainly from these countries that the volunteers come to join the Georgian Legion”, explains one of the recruiters of the Georgian Legion.

The number of volunteer fighters is not communicated

The Ukrainian Ministry of Defense does not communicate on the number of foreigners currently involved alongside the country’s armed forces.

But unofficially, the soldiers say that it tends to increase and that they would like to see the Western military officially on the ground in Ukraine.

“I hope my presence here sends the message that the world is not going to stand idly by, that even if their government does not stand up for what is right, the citizens of every country are ready to do so,” let Justin Dee know.

Since the outbreak of the conflict in 2014, thousands of international volunteers have already traveled to Ukraine to take part in the fighting.

News of the day | February 6 – Midday