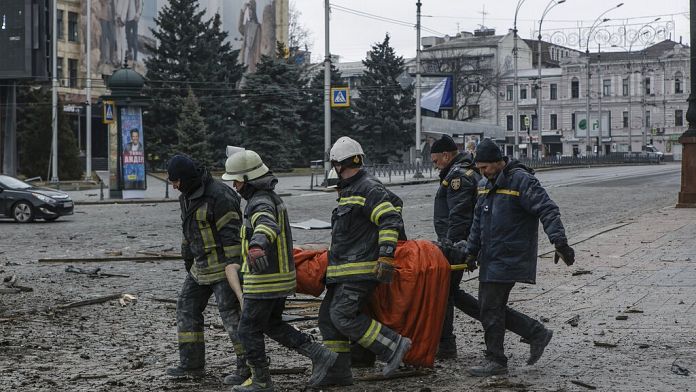 Continuation of the Russian bombardments in Kiev and Kharkiv in particular, slowdown of the convoy of Russian armored vehicles towards the capital, exodus of refugees… Update on the developments of the day in the war in Ukraine.

A Russian strike on Tuesday targeted the television tower in Kiev, killing several people and causing the interruption of the broadcasting of channels for an hour, announced the Ukrainian Ministry of the Interior.

On images released by the authorities, we see her drowned in thick gray smoke, but still standing.

The strike “hit” equipment in this tower, which is located not far from an important memorial to the victims of the Holocaust.

Earlier, the Russian army had called on civilians living near security services infrastructure to evacuate, saying it wanted to attack them to stop “computer attacks against Russia”.

The bombings followed one another on Kharkiv, a city of 1.4 million inhabitants near the border with Russia, which the assailants are trying to seize.

In its central square, the headquarters of the regional administration was partly destroyed, Governor Oleg Sinegoubov said, in a video on Telegram showing an explosion.

At least 10 people were killed and more than 20 injured, while eight others perished when an apartment building was hit.

Photos made public overnight from Monday to Tuesday by the American satellite imagery company Maxar showed a Russian convoy stretching for tens of kilometers and heading towards the capital from the northwest.

For the US Department of Defense, however, the situation was not as clear as it first appeared.

“We have the general feeling that the movement of the Russian army (…) towards Kyiv has stalled at this point“, indeed declared one of its leaders.

“We believe this is partly related to its own supply and logistical concerns.” and, “more globally“, “the Russians are taking stock to rethink“their strategy,” he continued.

In the Ukrainian capital, in any case, those who remained are preparing as best they can for the arrival of Russian troops, erecting barricades, digging trenches and making Molotov cocktails.

Russian advances in the southeast

Russian forces appeared to have advanced into southern Ukraine, on the shores of the Sea of ​​Azov, where several major cities are located.

In the port of Mariupol, “all neighborhoods” are under bombardment, said the governor of the region, speaking of 21 wounded and an unknown number of dead.

The Russian Defense Ministry said its troops advancing along the coast from Crimea had joined those moving in from the pro-Russian separatist territory of Donetsk, giving them strategic territorial continuity.

The information was immediately unverifiable. Shortly before, the Ukrainian army had claimed to have thwarted this attempt.

The list of the dead thus continues to grow without us having verifiable figures. Kiev speaks of more than 350 civilians killed.

But neither the Russians nor the Ukrainians specify the military losses.

Since the beginning of the Russian invasion on February 24, a million people have been displaced within Ukraine itself and more than 677,000 have left for neighboring countries – mainly Poland, but also Hungary, Slovakia and Romania, according to the United Nations High Commissioner for Refugees.

Long lines of cars continued to head towards the Polish border, from the big city in western Ukraine, Lviv, which had become an exit door and a center of retreat, for Ukrainians as well as for Western embassies. .

A new round of talks between Russian and Ukrainian representatives could take place on Wednesday, according to Russian media. Discussions that would take place this time on the border between Poland and Belarus.

The first discussions on Monday were unsuccessful.

This Wednesday morning a meeting is to be held in Vienna, Austria, at the headquarters of the International Atomic Energy Agency (IAEA). This meeting is dedicated to nuclear facilities in Ukraine.

Experts are particularly concerned about the state of nuclear waste on the Chernobyl site, now in Russian hands.

They were awarded the Sakharov Prize AND the Nobel Peace Prize: who are they?