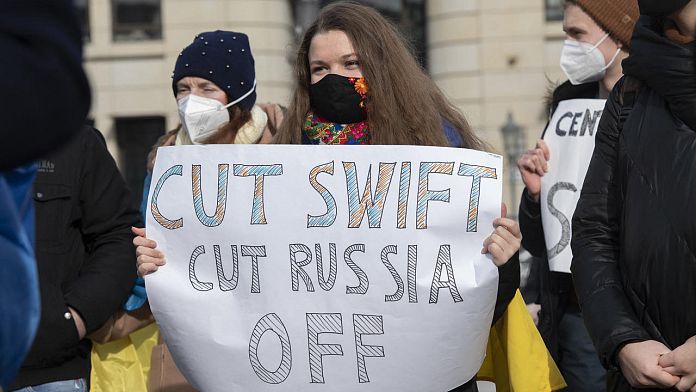 Western countries adopted a new round of financial sanctions against Moscow after the invasion of Ukraine, planning on Saturday to exclude many Russian banks from the Swift interbank platform, a vital cog in global finance.

In a joint statement, the White House said the leaders of the European Commission, France, Germany, Italy, the United Kingdom, Canada and the United States were “committed to continuing to ‘impose costs on Russia that will further isolate it from the international financial system and our economies’.

“We are committed to excluding a selection of Russian banks from the Swift messaging system”measures that will be taken “in the coming days”added the White House.

Here are some benchmarks on the functions of the Swift interbank platform and the scope that this rarely used financial weapon can have.

Swift is one of the largest banking and financial messaging networks founded in 1973. The company, an acronym for Society for Worldwide Interbank Financial Telecommunication, is based in Brussels.

Unlisted, Swift is organized as a banking cooperative. The company presents itself as neutral.

It is notably at the origin of the BIC code, which makes it possible to identify a bank via a unique code composed of 8 to 11 characters, taking into account the name of the bank, its country of origin, its location and the branch. having processed the order in question.

What is Swift for?

All thanks to standardized messages, allowing fast, confidential and inexpensive communication between financial institutions.

The company highlights its reliability on its website and claims “more than 11,000 banking and securities organizations, market infrastructures and corporate clients in more than 200 countries and territories”.

Swift’s role goes beyond the financial framework: an agreement signed in mid-2010 by the United States and the European Union officially allows the American Treasury services to access the banking data of Europeans via the network, on behalf of the fight against terrorism.

What does Swift represent in Russia?

According to the site of the national association Rosswift, Russia would be the second country after the United States in number of users with some 300 Russian banks and institutions members of the system.

More than half of Russian credit organizations are represented in Swift, according to this source.

However, Moscow is setting up its own financial infrastructure, whether for payments (“Mir” cards, intended as the equivalent of Visa and Mastercard), rating (Akra agency) or transfers, via a system called SPFS.

Are there any precedents?

In November 2019, as part of the sanctions decided by the United States against Iran, Swift “suspended” the access of certain Iranian banks to its network.

Donald Trump’s Treasury Secretary at the time, Steven Mnuchin, promised to submit the company “to US sanctions (if it provided) financial messaging services to certain Iranian financial institutions”.

Yet subject to the only Belgian regulator, Swift had only taken a few days to comply, judging in a press release the measure “regrettable” but compliant “in the interests of the stability and integrity of the global financial system as a whole”.

Iran had already been disconnected from the Swift system from 2012 to 2016.

Tactically, “the advantages and disadvantages can be discussed”, says Guntram Wolff, director of the Bruegel think tank.

Cutting off a bank’s access to the Swift network means prohibiting it from receiving or issuing payments via this channel. By extension, it is also prohibiting foreign establishments from trading with this bank.

However, taking out a country as important as Russia could accelerate the development of a competing system, with China for example. The Swift system is all the more effective when everyone participates in it.