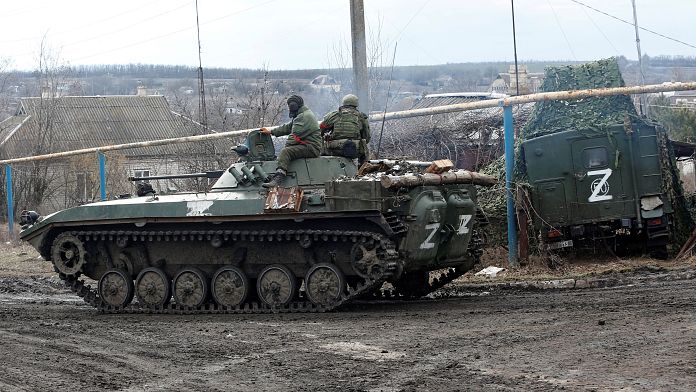 Within days, the Z symbol mushroomed all over Russia: on Russian military vehicles, on pro-Russian social media accounts, on private cars and trucks, on t-shirts and hoodies, and even on the leotard of a young medal-winning Russian gymnast.

The Z has become the symbol to show support for President Putin and Russia’s invasion of Ukraine, a phenomenon that has gained momentum in a very short time.

This symbol even appears on some official documents. Russian media reports that the head of Kemerovo oblast has decided to change the official spelling of the Kuzbass region to Z, and Roskomnadzor, the Russian media watchdog, has capitalized ” Z” of his name on Telegram.

What does the symbol Z mean?

Written in the Latin alphabet rather than Cyrillic, experts aren’t entirely sure of its exact meaning. It’s likely that people who use the symbol Z don’t know it for sure either, even though they implicitly understand what it stands for.

“For now, its meaning is less clear than how it is used“, said Donnacha Ó Beacháin, professor at Dublin City University and specialist in post-Soviet politics.

“Nobody knows for sure what it means, although several theories exist. Some think Z stands for Za pobedy (for victory) while others think it could be Zapad (West). All this is all the more strange since the letter Z does not exist in the Russian alphabet.“

While many Russian military vehicles heading west during the invasion of Ukraine did have the letter Z – consistent with this latter theory – other military vehicles also had different letters, such as V and O. .

The Russian Ministry of Defense has somewhat muddled the issue by posting on its official Instagram and Telegram pages that Z stands for: “Za Pobedu” (“For victory”), “Za Mir” (“for peace”), “Za pravdu” (“for the truth”) and “Za Rossiou” (“for Russia”).

A symbol to support a nationalist fervor?

One point, however, is certain with the Z symbol: the nationalistic fervor it engenders among supporters of Vladimir Putin and the war in Ukraine.

One example: In a video clip shared online, three young men, wearing black hoodies with the Z logo on the front, stand in front of a small crowd of people waving Russian flags. One invokes the Siege of Leningrad during the Great Patriotic War – what Russia calls the period of World War II after 1941, when the Soviet Union joined the side of the Allies against Germany: “Do you think that we, the descendants of those who despite a famine of several years fought the fascists and defended the front, are going to sell our homeland for dollars and iPhones?“
Another states that “the task of our military now is to tighten the noose around Nazism […] to defend our people who must fight for their right to speak their mother tongue freely“.”Our task is to defend the streets of Russian cities from traitors and provocateurs“, he says, referring to all those who demonstrate against the war, concluding with a “Work, my brothers! For Russia! For the President!“

Ryhor Nizhnikau, a senior fellow at the Finnish Institute of International Affairs in Helsinki, says the Z symbol feeds into that Russian nationalist narrative that the Kremlin likes to promote. “Russian nationalists have long criticized the Russian state for its lack of action and have always claimed that it was weak towards the West, that it was not active or proactive enough and that it did not defend enough russians“, explains Mr. Nizhnikau to Euronews.Nationalist groups finally found an exhilarating moment for them; the Russian state is really starting to implement this new imperial policy“with the invasion of Ukraine.

According to Professor Donnacha Ó Beacháin of the University of Dublin, the Z sign is obviously used to mobilize Russians to support the war. “I would say there is a push for people to show their support in Russia using this symbol“.

Could the Z symbol have been created by communications advisers

Even for experts, the origin of the Z symbol remains somewhat mysterious, although Mr. Nizhnikau believes that it was invented only recently.

Perhaps the simplest explanation is that the Z was used as part of a psychological military campaign: to choose a sign that would be easily adopted both in Russia and the West. “I wouldn’t be surprised if there were some kind of ‘spin doctors’ [des conseillers en communication, NDLR] in the Kremlin who thought about this sign before the start of the war. They need a symbol of victory for this action in Ukraine“, explains Ryhor Nizhnikau,These ‘marketers’ probably figured the easier the symbol, the easier it will be to spread.This plausible explanation might turn out to be the most likely, especially considering how quickly the use of the Z logo spread in Russia.

The Kremlin-run channel RT recently started selling a range of merchandise bearing the Z symbol in its online store. Elsewhere on the internet, a woman from Donetsk, a city in the pro-Russian breakaway east of Ukraine, posted on Instagram a photo of her fingernails painted black with a white Z.

In the city of Barnaul, in central Russia, a huge Z appeared in the snow, in the orange and brown colors of the ribbon of St. George, a symbol of military valour; while flash mobs and choirs took place in many Russian regions, including remote areas, with participants wearing Z signs.

Climate: NGO models rising water and its consequences for cities