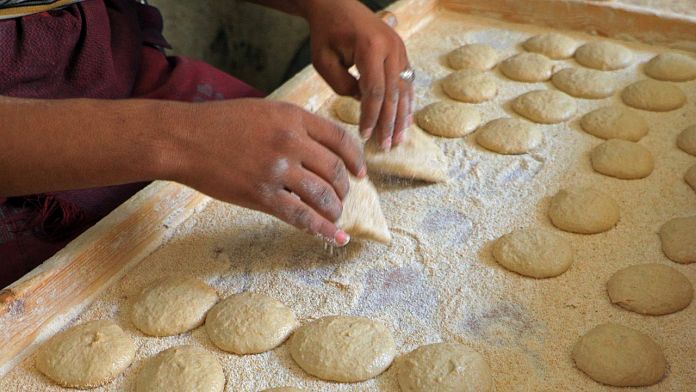 Households in North Africa are scrambling to stock up on flour, semolina and other staples as food prices rise following Russia’s invasion of Ukraine, two wheat exporting countries in the region.

This rush is all the more serious as it comes a few weeks before the start of the holy month of Ramadan, during which Muslims traditionally break the fast from dawn to dusk with hearty family meals.

Tunisia, Morocco and Libya, along with several other Arab countries, import much of their wheat from Ukraine and Russia.

Some fear that the Russian invasion could lead to famine, the memory of rising food prices having played a role in several Arab uprisings over the past decade.

In a supermarket in the Tunisian capital, the shelves were empty of flour or semolina, and only three packets of sugar sat on a shelf near a sign saying: “One kilo per customer, please“.

Store officials said that the problem was due to “panic buying“, and not to shortages. Bulk shopping ahead of Ramadan, which is expected to begin in early April this year, is common in Muslim countries. But some say the war in Ukraine has sparked a buying frenzy.

Hedi Baccour, from the Tunisian Union of Supermarket Owners, said daily sales of semolina – a North African staple used in couscous dishes – have surged of “700%” in recent days.

Sugar sales have tripled as Tunisians stock up on basic foodstuffs, said Hedi Baccour, who insisted there was no food shortage.

The Baker Slim Talbi said to have paid for the flour three times more expensive than in the past, “although the real effects of the war (Russia-Ukraine) have not yet touched us“.

The Tunisia imports from Ukraine nearly half of the common wheat used for bread making. Authorities say the North African country has enough reserves to last three months.

The Libyarich in oil, gets about 75% of its wheat from Russia and Ukraine. Morocco is also very dependent on the same source of supply.

Food prices were on the rise in North Africa before Russia invaded Ukraine more than two weeks ago.

Mourad, 37, a shopper from the Moroccan capital Rabat, said climate change and drought – the worst in his country in decades – were also to blame.

To keep prices affordable and avoid a repetition of bread riots that broke out in the 1980s, Tunisia subsidizes basic products such as sugar, semolina and pasta. Over the past decade, she has fixed the price of a loaf of bread at six cents American. Algeria plans to remove subsidies on basic products, but has not yet done so.

After a strike by truck drivers this week, Morocco said it was considering subsidizing fuel in the sector”to protect citizens’ purchasing power and keep prices reasonable“, according to government spokesman Mustapha Baitas.

In Libya, which this month found itself with two rival prime ministers amid fears of renewed violence, theFood prices have also skyrocketed.

War in Ukraine: the media in Russia under tighter control