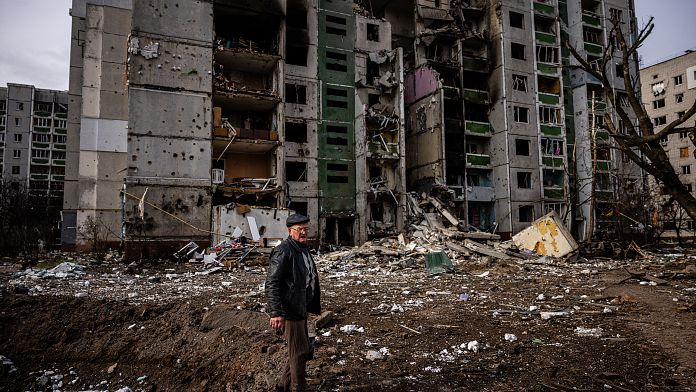 Russia announced a ceasefire on Saturday to allow the evacuation of civilians from two towns in eastern Ukraine, including the encircled strategic port of Mariupol, after consultations between representatives of Kyiv and Moscow.

“The Russian side declares a regime of silence (of arms) and the opening of humanitarian corridors for the evacuation of civilians from Mariupol and Volnovakha”, said the Russian Defense Ministry, quoted by Russian news agencies.

“The evacuation of the civilian population will begin at 11 a.m.”, said the town hall, referring to a temporary ceasefire agreement with Russia which will be in force on Saturday from 10:00 a.m. to 4:00 p.m. local time.

According to Ukrainian Deputy Prime Minister Irina Vereshtchuk, the objective was to evacuate 200,000 people from Mariupol and 15,000 from Volnovakha, a town located about sixty kilometers north of Mariupol.

The ministry said the location of the humanitarian corridors and exit points had been determined in agreement with the Ukrainian authorities, according to the agencies.

On the night of Friday to Saturday, the mayor of Mariupol, Vadim Boïtchenko, announced that this strategic port located on the Sea of ​​Azov and normally counting 450,000 inhabitants was subject to a “blockade”.

Pro-Russian separatist forces and the military said the town was surrounded.

NATO members on Friday rejected Kyiv’s request to create a no-fly zone in Ukraine to avoid becoming involved in the conflict.

Ukrainian President Volodymyr Zelensky regretted this decision, denouncing a form of “self-hypnosis” by members of the Alliance.

“Today there was a NATO summit, a weak summit, a confused summit, a summit where it was clear that not everyone sees the battle for Europe’s freedom as the ‘objective number one’, said the Ukrainian president.

The Russian army has occupied the Zaporozhye nuclear power plant in southeastern Ukraine since Friday, where artillery strikes, according to the Ukrainians, caused a fire.

An explosion at the Zaporozhye power plant, the largest in Europe, would have been the equivalent of “six Chernobyls”, alarmed Ukrainian President Volodymyr Zelensky.

Moscow for its part has categorically denied having attacked the site. This is a “lie”, affirmed the Russian ambassador to the Security Council, Vassili Nebenzia. In Moscow, the Russian Ministry of Defense implicated “groups of Ukrainian saboteurs, with the participation of mercenaries”.

3rd round of negotiations expected this weekend

According to Mykhaïlo Podoliak, adviser to the Ukrainian presidency, a third round of Russian-Ukrainian negotiations could be held on Saturday or Sunday.

But the chances of achieving progress appear extremely slim, with Russian President Vladimir Putin warning that dialogue with Kyiv would only be possible if “all Russian demands” were accepted.

After ten days of war, the balance sheet is impossible to verify independently.

Moscow reported 2,870 dead on the side of “Ukrainian soldiers and nationalists” and 498 on the Russian side, Kyiv evokes more than 9,000 Russian soldiers killed.

“Hundreds if not thousands of civilians have been killed and injured” and the toll will continue to grow, US Foreign Minister Antony Blinken said on Wednesday.

[Photos] War in Ukraine: the heartbreaking farewell of families forced to separate

Regional election in Germany: a test for Olaf Scholz