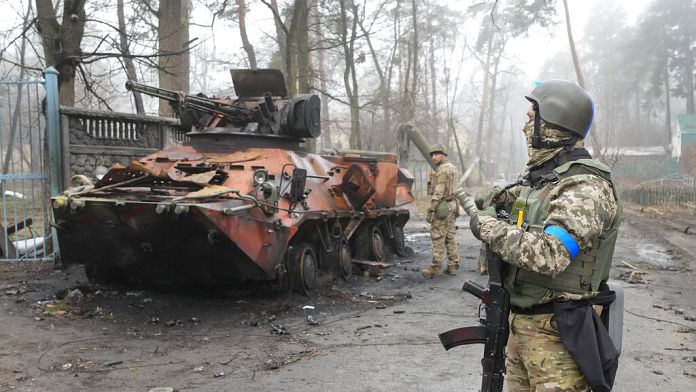 Efforts to redeploy Russian forces continue on the 37th day of their invasion of Ukraine, whose army is increasing localized counter-attacks to regain lost space and harass its adversary.

The refocusing of the Russian war effort on the Donbassin eastern Ukraine, where Russian forces will face a hardened Ukrainian army, portends a conflict “prolonged”which could last for months, warned the Pentagon.

Here is an update on the situation, based on elements from AFP journalists on site as well as official Ukrainian and Russian statements, Western sources, analysts and international organizations.

Russians “continue their partial withdrawal” from the north of the kyiv region towards the Belarusian border, indicated the Ukrainian Ministry of Defense, which denounces looting by Russian soldiers.

The Ukrainians took over the villages of Sloboda and LukashivkaSouth of Chernihivalong one of the main routes between this city and the capital, according to the British Ministry of Defence.

“Chernihiv like Kyiv were subjected to continuous strikes despite claims by the Russians that they were reducing activity in this area”he added on his Twitter account.

I’American Institute for the Study of War (ISW) predicts further territorial gains for Ukrainians in the coming days, northwest and east of the capital.

Russian troops have left the central Chernobyl which they had occupied since the start of the invasion on February 24, according to the Ukrainian authorities.

“Ukrainian forces continued to repel Russian assaults in the districts of Donetsk and Lugansk and Russian forces have failed to take any territory for 24 hours”according to the ISW.

The Ukrainian president assured that the Russian army was repositioning itself in the east of the country in anticipation “powerful attacks”in particular on the besieged port of Mariupol where a new attempt to evacuate civilians is to take place on Friday.

This strategic port in the southeast of the country, on the Sea of ​​Azov, remains besieged and shelled relentlessly. At least 5,000 people have died and 160,000 civilians are still believed to be stranded, according to Ukrainian sources.

“It may last for a number of days or weeks. The resistance is fierce but the complete takeover of the city by the Russians seems inevitable”estimated Friday the French staff.

A Russian official on Friday accused Ukraine of carrying out a helicopter attack on a “oil depot” in the town of Belgorodin western Russia, about forty kilometers from the Ukrainian border.

The Ukrainian armed forces claimed to have liberated 11 localities in the Kherson region (south). Two people were killed and two others injured in Russian shelling on Thursday, according to the regional governor.

What is the human toll?

No precise and recent assessment of the civilian victims is available but it obviously reaches – and at the very least – several thousand.

Militarily, the ranges are extremely wide. Russia acknowledged last week the death of 1,351 soldiers for 3,825 wounded, the first figures for more than three weeks.

Western sources speak in unison of several thousand deaths on the Russian side, kyiv even going as high as 12,000.

On the Ukrainian side, President Volodymyr Zelensky mentioned on March 12 “about 1,300” soldiers killed. A figure that is also insignificant. Analysts note, however, that war generally benefits the defense, which suffers fewer losses than the attack.

The NGO Human Rights Watch called on the Ukrainian authorities to investigate potential “war crimes” towards Russian prisoners, after the broadcast of images appearing to show Ukrainian soldiers shooting them in the legs.

How many refugees and displaced persons?

The conflict has already forced more than 4.1 million Ukrainians to flee their country, according to the UN.

In total, more than ten million people, more than a quarter of the population, have had to leave their homes either by crossing the border to take refuge in neighboring countries, or by finding refuge elsewhere in Ukraine.

The UN estimates the number of internally displaced persons at nearly 6.5 million.

Neighboring the war in Ukraine, Moldova holds its breath

Resumption of evacuations of civilians from Mariupol