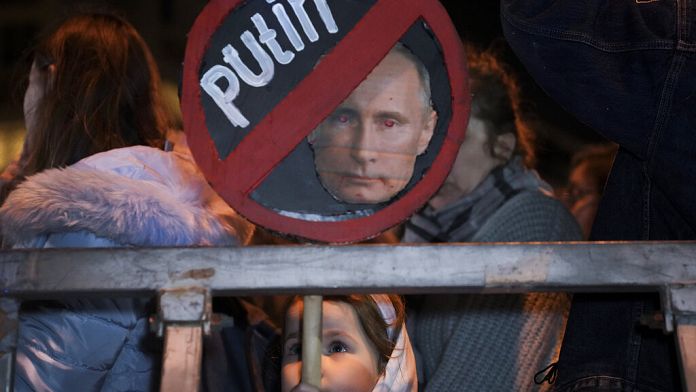 From Tel Aviv to New York, thousands of demonstrators once again took to the streets of major Western cities on Saturday to say “no to war in Ukraine!”.

Hundreds of people marched through Tel Aviv, Israel on Saturday night in support of Ukraine and protesting the ongoing Russian invasion of the country. Protesters marched to the Russian Embassy with Ukrainian flags, some of them waving banners that read “Stop the war”.

“I am here to oppose Vladimir Putin who is destroying the Ukrainian people, as well as the Russian people. He is a tyrant”, says an Israeli woman who came to demonstrate against the war.

They were also thousands on the iconic Times Square in New York.

Most of the protesters, who are Ukrainians or of Ukrainian descent, gathered to demand more action from the United States and the European Union. Some even called for an intervention in Ukraine by NATO and the United States.

“It is we who are on the good side, we are defending our country. Ukraine has always been a peaceful country, always. We have never wanted war. Ukrainians have never attacked anyone,” explains one of the protesters.

Germany still in solidarity with Ukraine

In Germany, demonstrations for peace are multiplying. Like in Hamburg, where around 30,000 people demonstrated in solidarity with Ukraine and for peace in Europe.

The Ukrainian diaspora, and youth organizations of several political parties have mobilized to organize these demonstrations across Germany.

Arrived in Guadeloupe, Sébastien Lecornu wants to embody a firm state, but open to dialogue