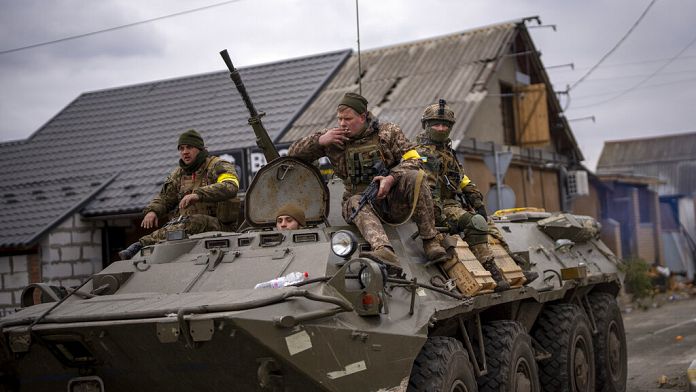 On the eleventh day of the invasion, Russian forces maintain pressure on the southern regions of Ukraine and on Kyiv. But Ukraine resists. On Saturday, the Ukrainian military released a video showing a Russian helicopter gunship shot down by a surface-to-air missile.

For his part, Russian President Vladimir Putin threatened to deprive the country of its “statehood” and compared the international sanctions which hit Russia to a “declaration of war”.

But Ukrainian President Volodymyr Zelensky, like his people, resists: “our people do not back down, do not give up, do not cease the resistance. They shout to the occupiers: go home. That is why we must push them back from our territories, we must block their path”.

“Heavy fighting” in the south and north

Ukraine’s armed forces are “firing fierce battles” against Russian forces for control of the southern towns of Mykolayev and northern Cherniguiv, the Ukrainian General Staff said in a statement on Facebook Sunday morning. A Ukrainian military operation was also underway in the Donetsk region (east).

“The main efforts are focused on the city of Mariupol”, a strategic port in the south-east of the country, added the staff.

Russian forces are closing in on Kyiv, encountering stubborn resistance and sometimes bombing apartment buildings, notably in Cherniguiv, 150 km north of the capital, where dozens of civilians have been killed in recent days.

The Ukrainian president announced on Saturday that the Ukrainian forces had launched a counter-attack around Kharkiv (north-east), the second city of Ukraine (1.4 million inhabitants), the scene of among the most intense bombardments since the start of the war.

Moscow communicates much more compared to the beginning of the war. This Saturday, the Russian army released new images showing weapons abandoned by Ukrainians. According to Moscow, it would be military equipment donated by NATO.

The Russian army announced on Saturday afternoon that it had resumed the “offensive” after the postponement of the evacuation of civilians from Mariupol, a strategic port in the south-east of the country besieged by Russian forces.

According to the mayor of the city, the bombardments of the last few days have made “thousands of wounded” and the Russian forces are preventing the arrival of food and medicine.

In Mariupol, “The situation is catastrophic and getting worse day by day”said Laurent Ligozat, emergency coordinator of the NGO Médecins sans frontières (MSF), adding that the inhabitants lacked everything: water, to the point of having to collect and melt snow to get it, electricity, heating and food, many shops having been destroyed.

The capture of this city of some 450,000 inhabitants, located on the Sea of ​​Azov, would allow the junction between the Russian forces coming from annexed Crimea, which have already taken the key ports of Berdiansk and Kherson, and the separatist troops and Russians in the Donbass.

Russian President Vladimir Putin stressed on Saturday that Russia would regard as co-belligerent any country attempting to impose a no-fly zone over Ukraine, a claim by Kyiv that NATO has rejected, and asserted that the sanctions imposed on his country were similar “to a declaration of war”.

Vladimir Putin also warned against a possible loss by Ukraine of its “statehood” if the Ukrainian authorities do not change their policy.

“These sanctions that are put in place are akin to a declaration of war”, said Vladimir Putin. “But thank God we haven’t gotten there yet”he added.

Israeli Prime Minister Naftali Bennett launched mediation between Russia and Ukraine on Saturday, with visits to Moscow and then Berlin and a telephone conversation with Ukrainian President Volodymyr Zelensky.

So far, he has not joined in the chorus of international condemnations of Russia’s invasion of Ukraine, emphasizing the strong ties that unite Israel with Moscow and Kyiv. Few details have leaked out on the exact content of the discussions.

“The voice of every African leader counts” assures Linda Thomas-Greenfield

Naked for feathers: demonstration against the use of bird feathers in clothing