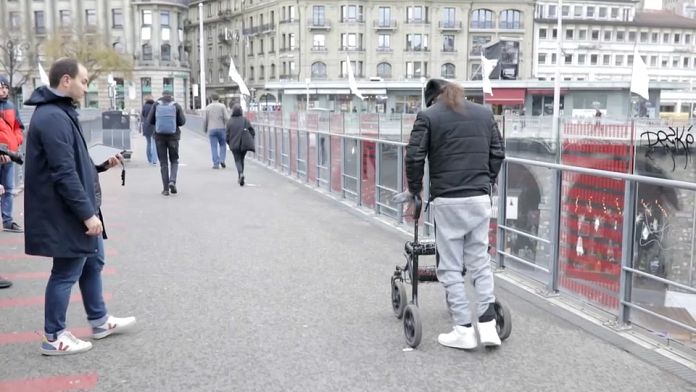 They couldn’t move their legs, not even feel them. Several paraplegic patients are now able to walk again thanks to an implant that electrically stimulates their spinal cord, an advance that could become widespread in the next few years.

This technology has allowed three paraplegics “to stand again, to walk, cycle and swim again”, summarizes a study published Monday in the journal Nature Medicine.

These three patients, all men, were not only incapable of any movement of the legs, but they no longer had the slightest feeling there, following accidents which had damaged their spinal cord.

The spinal cord, contained by the vertebral column, extends the brain and controls many movements. These can therefore be irretrievably lost if the contact with the brain is damaged.

In Lausanne, a team, led by the Swiss surgeon Jocelyne Bloch and the French neuroscientist Grégoire Courtine, implanted them with about fifteen electrodes which make it possible to electrically stimulate several areas of their spinal cord.

This is not a first, but rather the culmination of ten years of work of this type with, finally, the prospect of making it a therapy that would change the lives of many paralytics.

The idea of ​​sending an electric current to regain lost motion dates back decades and was first put into practice in 2011 when a paraplegic was able to stand upright again.

The operated patients were able to take their first steps almost immediately this time, even if they were taken on a treadmill in the laboratory and had nothing to do with normal walking.

“You shouldn’t imagine an immediate miracle (but) it allows you to practice your activities right away”, explained Grégoire Courtine during a press conference. After five months of rehabilitation, the progress was considerable: one of the patients, for example, was able to walk almost a kilometer without interruption.

To achieve such breakthroughs, the researchers improved the technology used compared to previous experiments.

This time, “the electrodes are longer and larger than those used before, allowing access to more muscles”detailed Jocelyne Bloch.

Accessible within a few years

When will these advances be able to benefit the greatest number? “Hopefully in a few years”believes Ms. Bloch.

The technology is to undergo much larger clinical trials under the aegis of a Dutch startup, Onward. This company aims to make it easily usable using a smartphone, for example to control its triggering.

Because this is one of the limits to take into account: as soon as it is turned off, the electrical stimulation has almost no lasting effect. And it is inconceivable to maintain it permanently, which would exhaust the patient’s organism.