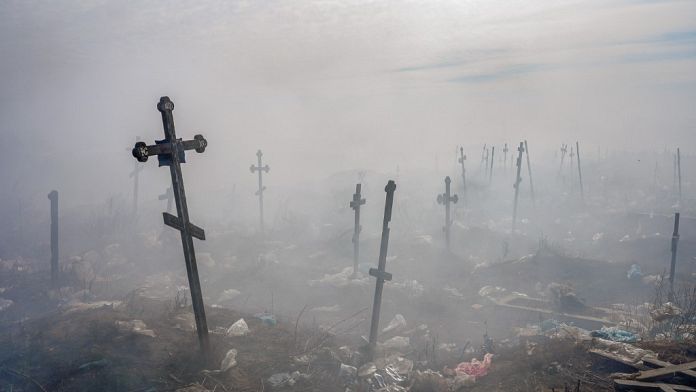 Zelensky ready to discuss Donbass and Crimea with Putin

Ukrainian President Volodymyr Zelensky said he was ready on Monday to discuss with his Russian counterpart Vladimir Putin a “compromise” on Donbass and Crimea to “stop the war”.

Any compromise on these territories will however have to be ratified by Ukrainians in a referendum, and be accompanied by security guarantees for his country, he however warned.

Zelensky: no NATO membership, because the Alliance is afraid of Russia

“We have all already understood this. We are not accepted (in NATO), because they (its member states) are afraid of Russia. That’s all. And we have to calm down and say: OK , (there will be) other security guarantees”Volodymyr Zelensky said Monday in an interview with Suspilne, a Ukrainian regional public media.

“There are NATO countries who want to be guarantors of (Ukraine’s) security (…) who are ready to do everything that the Alliance would have to do if we were members of it. And I think it’s a normal compromise”he added.

Russia blocks the site of the French channel Euronews

The Russian media regulator on Monday blocked access to the site of the French channel Euronews, a new media banned in Russia amid increased control over information related to the offensive in Ukraine. The reason for this blocking was not specified.

Zelensky rejects any ultimatum and wants to meet Putin

“Ukraine cannot accept any ultimatum from Russia. First we must be destroyed, only then their ultimatums will be respected”Ukrainian President Volodymyr Zelensky said on Monday.

He also insisted on the need for a “meeting”, “in any form whatsoever”, with his Russian counterpart Vladimir Putin to “stop the war” in Ukraine. “I believe that without this meeting it is impossible to fully understand what they (the Russians) are ready for in order to stop the war,” Volodymyr Zelensky said in an interview with Suspilne, a Ukrainian regional state media.

A Nazi concentration camp survivor, Boris Romantschenko, was killed in the bombing of the building where he lived in Kharkiv, northeastern Ukraine, the German Buchenwald and Mittelbau Memorials Foundation said on Monday. – Dora.

Ukraine will not “lay down its arms and leave the besieged city” of Mariupol (south), declared its deputy Prime Minister, ignoring a Russian ultimatum.

The European Union has denounced the indiscriminate destruction in the besieged city as a “major war crime” and decided to double its financial support for arms purchases sent to kyiv.

A yacht belonging to Russian billionaire Roman Abramovich has docked in southwestern Turkey, a country that does not apply Western sanctions against Russian oligarchs, including the owner of the Chelsea club.

Russia on Monday summoned the US ambassador to Moscow and accused President Joe Biden of bringing Russian-US relations “to the brink”.

Cycling: a cork of prosecco pushes Biniam Girmay to throw in the towel on the Giro