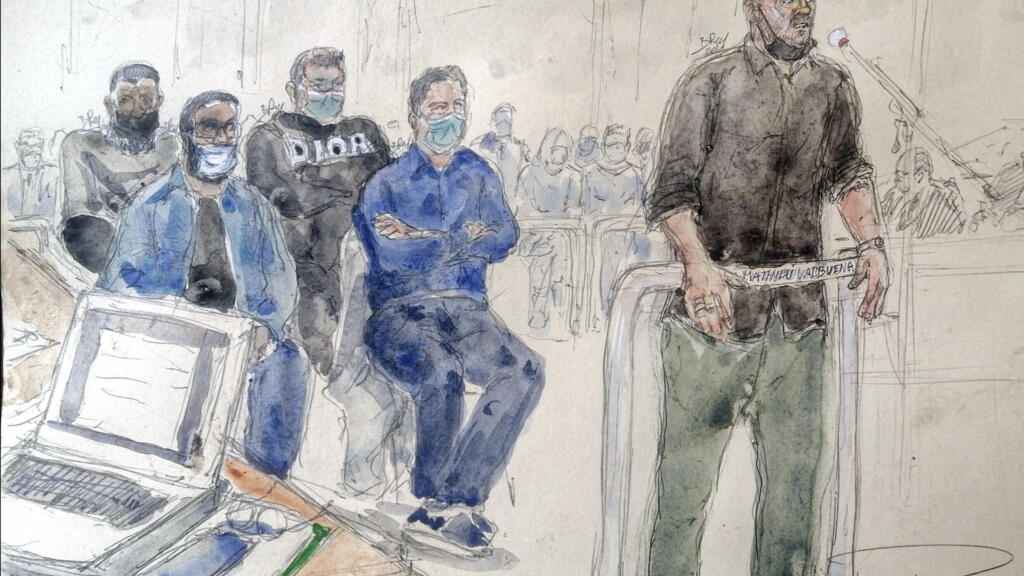 The first day of the trial of the “affair of the sextape” was marked by the testimony of the victim, the footballer Mathieu Valbuena, who says he “was afraid for his career” when Karim Benzema came to him pretending to help him get rid of this problem of intimate video.

“Scared”, “upset”, “in danger” : on the first day of the trial of the “sextape case” Wednesday 20 October, the footballer Mathieu Valbuena described at length how he had welcomed the blackmail attempt of which he claims to have been the victim, in the absence of the main defendant, Karim Benzema.

“It’s been six years that we have this case, everyone is there or almost, he is missing Karim”, regretted Mathieu Valbuena in front of the press, before evoking at the helm their famous conversation of October 6, 2015 at the training center of the French team in Clairefontaine.

That evening, the two players exchanged for less than half an hour in the room of the Real Madrid striker. The complainant stated that he came out of the conversation “frightened” and “upset”. Karim Benzema, who had been commissioned by an intermediary of the alleged blackmailers, was “insistent on making me meet someone,” says Mathieu Valbuena, 37.

“I was afraid for my sports career”

His teammate in selection was not aggressive and did not mention money, admits the complainant, who however adds that “when you solve a problem like that (…) it is not in exchange for football places”.

“We are teammates in the French team, it is the Holy Grail for footballers, I never thought we could have reached this point,” he regrets. “I was afraid for my sports career, for the French team. I knew that if the video came out, it was going to be complicated for me in the French team, as we saw afterwards,” continues the midfielder who now plays for Olympiakos, in Greece.

A feeling that Karim Benzema could not answer at the hearing. His lawyer, Antoine Vey, explained the absence of the star striker of Real Madrid, candidate for the Ballon d’or, for “professional” reasons: the 33-year-old, who theoretically faces 5 years in prison and 75, 000 euros in fine, played Tuesday night a match in Ukraine and must prepare for the “Clasico” against FC Barcelona on Sunday.

“I hope that the court will draw the consequences”, of this absence, launched the lawyer of the complainant, Me Paul-Albert Iweins.

At the helm, Mathieu Valbuena retraces the thread of this somewhat nebulous story. It is Djibril Cissé, his former teammate at Marseille, who first tells him about this intimate video, making him a precise description after watching an extract.

“I felt in danger, my first reflex was to file a complaint”, details Mathieu Valbuena, who specifies that he never had “the idea of paying”.

On the other side of the bar, the defendants defend themselves from any blackmail. Axel Angot, who found the coveted video when Mathieu Valbuena gave him his phone, before copying it to his computer, emphasizes “not having heard of money”.

He explains that he wanted to do a favor, even for free, hoping that the player will one day return the elevator to him. He barely acknowledged with his lips that this enterprise amounted “indirectly to the same thing as blackmail”.

His friend Mustapha Zouaoui, considered the other “mastermind” of this affair, admits to him that Axel Angot “would not have said no” if Valbuena had been generous.

“I am not Mother Teresa”

Younes Houass, whom Axel Angot and Mustapha Zouaoui had contacted to act as an intermediary in their business, stepped forward.

This man who gravitated in the world of football, the only one except Karim Benzema to have spoken directly to Mathieu Valbuena during this case, recalls not having asked for money when the two men exchanged on the phone.

“I advised him to turn to a trusted man, someone who can have a cool head in the face of this kind of situation,” he told the court.

“Stop pretending that you are Mother Teresa, you are interested in money,” interrupts the president of the court, Christophe Morvan.

“I am not Mother Teresa,” he admits.

Noting that Younes Houass, who had been put in contact by Mathieu Valbuena with an undercover policeman, was “skating” in his negotiations, in the words of the president of the court, Axel Angot and Mustapha Zouaoui then had “the bright idea” to turn to Karim Zenati, childhood friend of Benzema.

The latter then enters the dance in Clairefontaine. Since this case, Mathieu Valbuena has not been called up to the Blues, unlike the Real Madrid striker. Karim Benzema stayed away for more than five years before making a surprise return before the Euro in June.