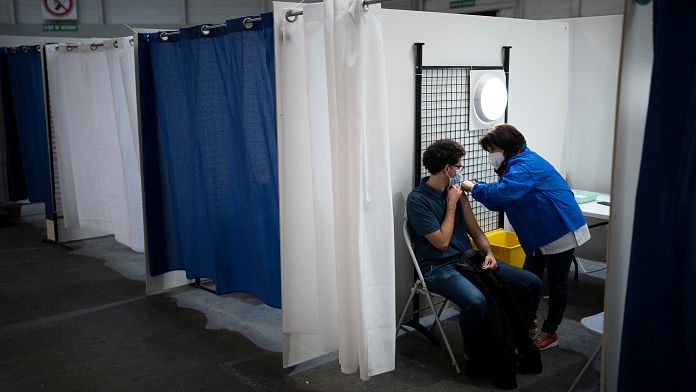 The Omicron variant continues to spread at high speed across the planet.

With 66.6% of the European population now fully vaccinated against the virus, the bloc is well prepared, says Ursula von der Leyen, President of the European Commission. But caution remains in order:

“If you look at the time it takes for new cases, to double in number, it seems to double every two or three days. And that’s huge. We’re told that in mid-January, we should we expect Omicron to be the dominant new variant in Europe.“

As many countries embarked on administering a third dose of the vaccine to counter this new wave, the European Medicines Agency (EMA) said on Wednesday that the Johnson & Johnson vaccine could be used for booster doses in people over 18 years of age.

To counter this new wave, the vaccination of children began this Wednesday in several European countries. After Denmark and Austria, 5-11 year olds are vaccinated with a version of the Pfizer vaccine that is weaker than that intended for adults in Germany, Spain, Greece, France or even Hungary. This age group is currently the most affected by contamination.

Even if there is more indecision than during the adult vaccination campaign, 74% of parents plan to have their child vaccinated in Spain, according to a survey.

A government television campaign features children rejoicing that it is “their turn” to be vaccinated to act like “grandpa and grandma, dad and mom, auntie and uncle, the mistress” and be able to “kiss without limit, help end this virus and protect the elderly “.

New delay for the Sanofi vaccine

Note that we will have to wait to see the vaccine from the French group Sanofi on the market. The results for its trials are postponed until the first quarter of 2022, which pushes back a marketing launch by as much. But the intermediate results are encouraging. A single booster dose of the vaccine candidate from Sanofi and GSK has indeed “made it possible to obtain strong immune responses”, argues the laboratory in a press release.

The results of this test thus show a multiplication of the order of 9 to 43 in neutralizing antibodies, regardless of the vaccine received for the primary vaccination.

Unlike its competitors, no messenger RNA for the future Sanofi vaccine but the use of a protein as an antigen to help the body recognize the virus.

Total and Chevron withdraw from Burma: the human rights situation behind the withdrawal