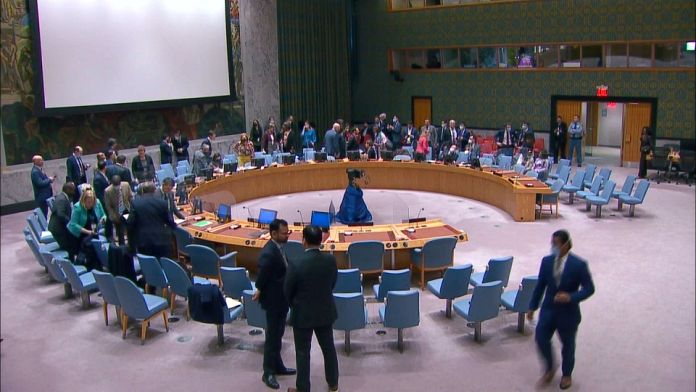 The international indignation caused by the firing of an intercontinental ballistic missile (ICBM) by North Korea came up against the refusal of China and Russia to strengthen the sanctions against Pyongyang.

The American ambassador to the United Nations, Linda Thomas-Greenfield, denounced during a meeting of the Security Council the “more and more dangerous provocationsof North Korea and announced that the United States would introduce a resolution to “strengthen the sanctions regime” adopted during a previous North Korean ICBM launch in 2017.

But Beijing and Moscow have exclude any hardening. The Chinese Ambassador Zhang Jun even pleaded on the contrary for a “timely relief from sanctions“, while the Russian diplomat Anna Evstigneeva said he fears that a strengthening of sanctions “threatens North Korean citizens with unacceptable socio-economic and humanitarian problems“.

The missile, fired on Thursday, flew higher and further than all previous ICBMs tested by the nuclear-armed country.

Called Hwasong-17, it is capable of striking any part of US territoryand landed in Japan’s Exclusive Economic Sea Zone.

North Korean leader Kim Jong Un personally ordered and supervised the test, assuring according to the state news agency KCNA that this missile would raise awareness in the “world (…) of the power of our strategic armed forces“.

North Korea is “ready for a long-lasting confrontation with the American imperialists“, added the one who appears, in photos taken by state media, wearing his usual black leather jacket and dark sunglasses, walking on the tarmac in front of a huge missile.

The shooting was condemned on Friday by the G7, which denounced a “flagrant violation” of North Korea’s obligations to the United Nations.

“These reckless actions threaten regional and international peace and security, pose a dangerous and unpredictable risk to international civil aviation and maritime navigation in the region and demand a united response from the international community.“, have underlined the Ministers for Foreign Affairs of the seven members of the G7 as well as the High Representative of the European Union.

North Korea “certainly has other things in store“after firing this missile, further estimated the US national security adviser Jake Sullivan.

The Hwasong-17, first unveiled in October 2020, is nicknamed “monster missile” by analysts. It had never been successfully tested before, and the launch brought new US sanctions.

It’s about “of a break in the moratorium on the launching of intercontinental ballistic missiles to which President Kim Jong Un” had committed in 2017, lamented the President of South Korea, Moon Jae-in.

The South Korean military said it responded by firing “missiles from land, sea and air“off its coast.

This did not prevent Pyongyang from carrying out around ten tests of this type of weapon since the beginning of the year.But it was not no intercontinental missiles so faralthough Washington and Seoul suspect the North Korean regime of having tested some ICBM systems during these launches.

Pyongyang carried out three ICBM launches in 2017. The device then tested, the Hwasong-15, was able to reach the United States.

According to Seoul, a missile test by the North Korea on March 16 ended in failure, the projectile exploding in the sky over Pyongyang shortly after launch. Analysts expected Pyongyang, which will celebrate the 110th birth anniversary of Kim Il Sung, the country’s founder and grandfather of Kim Jong-Un, on April 15, to engage in a show of force to mark the most important holiday on the North Korean political calendar.

Kim Jong-Un said last year that improving the country’s military capabilities was a priority for the regime.

Priority among priorities: developing an ICBM capable of carrying several conventional or nuclear warheads, each following an independent trajectory, difficult to intercept by anti-missile systems.

“Kim probably feels now is the perfect time to develop ICBMs, and to remind the world emphatically that the North, unlike Ukraine, is a nuclear-armed country.“, explained to Ahn Chan-il, expert on North Korea.

Resumption of evacuations of civilians from Mariupol

Afghanistan: mobilization of women for the reopening of schools for girls