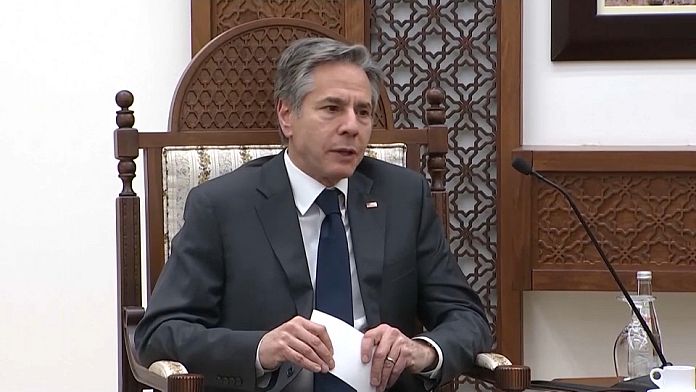 US Secretary of State Antony Blinken and his counterparts from Israel and four Arab countries concluded an unprecedented meeting on Israeli soil on Monday aimed at strengthening their cooperation, the Jewish state speaking of a strong message to Iran, a “common enemy”.

Gathered in Sde Boker, a kibbutz in the Negev desert (south) where the remains of the founder of Israel David Ben Gurion rest, the heads of diplomacy of the United States, Israel, Egypt, Morocco, the Emirates Arab States and Bahrain have all condemned the attack by the jihadist group Islamic State on Sunday in Hadera (north) in which two police officers including a Franco-Israeli were killed.

During a joint press conference, Israel mainly expressed its fears of a possible return to a 2015 agreement framing Iran’s nuclear program which it opposes.

Representatives of Arab countries and the United States insisted on the importance of strengthening multilateral cooperation and resolving the Israeli-Palestinian conflict.

“We are writing history here, building a new architecture based on progress, technology, religious tolerance, security and intelligence… This intimidates, deters our common enemies, first and foremost Iran,” declared the head of Israeli diplomacy, Yaïr Lapid.

The meeting in Sde Boker revolved around the question of the 2015 agreement supposed to prevent Tehran from acquiring the atomic bomb in exchange for the lifting of international sanctions, and which the West wants to resuscitate, according to diplomatic sources.

The United States and Iran, engaged in indirect talks, are seeking to revive this pact which crumbled after the unilateral American withdrawal in 2018. Tehran has, in retaliation, gradually freed itself from the limits imposed on its nuclear program .

Israel, considered by experts as the only nuclear power in the Middle East, says it fears that Iran, its sworn enemy, will take advantage of the agreement to acquire nuclear weapons on the sly. Iran has always denied seeking to acquire such a bomb.

“All the countries here except the United States have reservations about a nuclear deal with Iran and we have brought them closer to our position,” an Israeli official told AFP on condition of anonymity.

Alongside Yaïr Lapid, Mr. Blinken rather insisted on the “gains” linked to normalization in 2020 between Israel, the Emirates, Bahrain and Morocco, which according to him should not make us forget the Israeli-Palestinian conflict.

Normalization “is no substitute” for “progress” between Israelis and Palestinians, he said, reaffirming his support for the two-state solution, a viable Palestine alongside Israel.

A handful of people demonstrated in front of the hotel where the Negev meeting took place, with signs in Hebrew, Arabic and English with the inscription “Have you not forgotten someone?”, in allusion to the Palestinians.

The latter as a whole have castigated the process of normalization with Israel, believing that this should only take place after a settlement of the Israeli-Palestinian conflict.

Sunday, Anthony Blinken had met Mahmoud Abbas in the West Bank. The President of the Palestinian Authority called on the United States to implement its commitment to the two-state solution.

On the day of the Negev meeting, Palestinian President Mahmoud Abbas met with Abdullah II in Ramallah in the West Bank, a rare visit by the Jordanian king to this Palestinian territory occupied by Israel since 1967.

Jordan made peace with Israel in 1994, 15 years after Egypt, the first Arab country to sign such a treaty in 1979.

The visit of Abdallah II, intervening before Ramadan, the month of Muslim fasting due to begin at the end of the week, is seen as an attempt to ease tensions.

“The region cannot enjoy security or stability without a just and comprehensive solution to the Palestinian question,” the Jordanian king told President Abbas on Monday, who received Mr. Blinken on Sunday, according to the official Palestinian agency. Wafa.

These diplomatic negotiations also took place the day after the attack on Hadera.

“Our presence here is the best response to this attack,” said Moroccan foreign minister Nasser Bourita, calling for a “spirit of the Negev, that of coexistence,” to flourish.