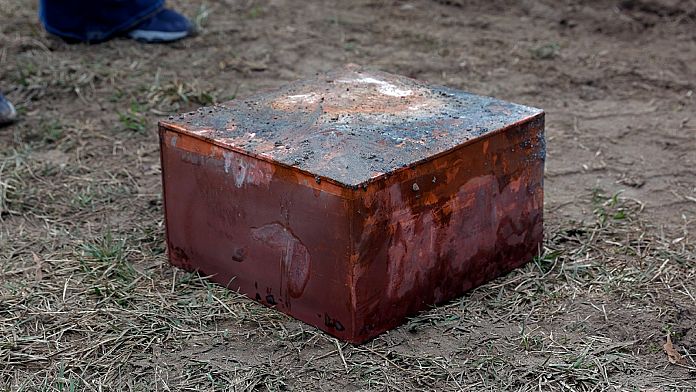 And two! Another one “time capsule“was discovered this Monday under the plinth of a statue of Confederate General Robert Lee unbolted last September. The installation of such a box had been documented at the time of the erection of this monument to the glory of this general southerner, attesting to the desire of contemporaries at the end of the 19th century to pass on objects or documents representative of an era to future generations.

This discovery comes a week after the opening of a first capsule which had disappointed experts and revived hopes of discovering a photo of Abraham Lincoln eagerly awaited by collectors.

And this time, those same experts are crossing their fingers, believing that this second box could be the right one.

The Virginia State Historic Resources Department (DHR) claims that this receptacle is made of copper, weighs 36 pounds (16 kg), and measures 13.5 inches by 13.5 inches by 7, 5 inches (34/34/19 cm). Measurements that would actually correspond with those given by local newspapers over a century ago.

Only worry, the famous box has been discovered “below ground level in a high humidity area“, according to the director of DHR Julie Langan. But the latter added that it is”too early to know if the water has seeped in“inside the box, giving rise to fear of alteration of its contents.

Anyway, for the governor of Virginia, there is no doubt, this is “THE” time capsule. Ralph Northam hailed this new update with a vibrant “They found her!“. This elected Democrat has documented this breathless treasure hunt many times.

“This is presumably the time capsule everyone was looking for“, he added on Monday, attaching photos of a rectangular metal box about thirty centimeters long to his message.

“Experts believe there may be Civil War coins, books, badges and even ammunition there.“, specified the governor in his tweet.

The capsule was therefore exhumed from under the pedestal of the imposing equestrian statue of General Robert Lee, head of the Confederate army who notably defended slavery during the Civil War (1861-1865). This statute was inaugurated in 1890 in Richmond, the former secessionist capital, located in Virginia. The monument, 18 meters high – statue and base included – was the work of French sculptor Antonin Mercié.

Seen as a symbol of the country’s slavery past by many Americans, the statue was debunked in September, against a backdrop of questioning of Confederate monuments.

Once the statue was taken down, experts began a search in its plinth for a mysterious time capsule placed there in 1887, which was believed to contain Civil War relics, such as buttons or bullets, Confederate currency, a Bible, but above all a photo showing President Abraham Lincoln in his coffin, a cliché presented as a historical bomb, likely to panic the collector’s market.

A first box was exhumed and then opened with care, but it contained only three books and a cloth envelope with a photograph, all damaged by water, as well as a coin of unknown origin.

This capsule seems to have been placed in the base by the workers who participated in the erection of the statue.

One of the works was a guide for astronomers and navigators dating from 1875. But another seemed to have been published in 1889, two years after the supposed burial of the capsule, suggesting that another receptacle of this type could be under the plinth.

General Lee’s statue in Richmond had become the target of anti-racist protests after the May 2020 death of George Floyd, an African-American suffocated below the knee of a white policeman in Minneapolis, and the rise of the Black Lives Matter movement.

During the Civil War, the Confederate South fought for the maintenance of slavery, which was abolished during the conflict in the rest of the country.

See you here in a few hours to find out if the capsule contains the expected treasures!