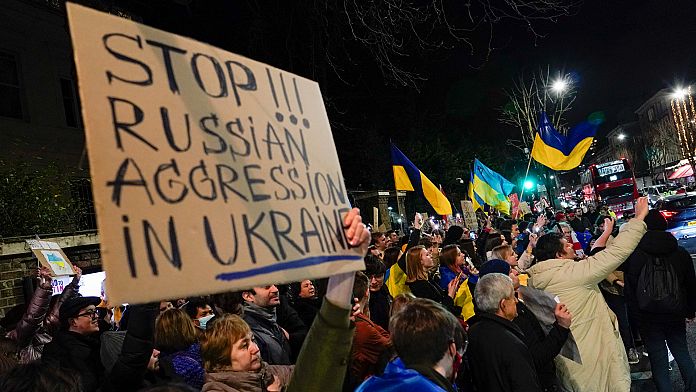 The Ukrainian Parliament adopted on Wednesday evening by a large majority the introduction of a national state of emergency in the face of the threat of a Russian invasion.

A total of 335 deputies against a required minimum of 226 votes, voted for this decision proposed by President Volodymyr Zelensky and supported earlier in the day by the National Security Council.

“Russia’s aggressive policy towards our country has been and remains the main challenge for our security,” declared in front of the deputies Oleksiï Danilov, secretary of the Council of security and national defense.

“According to our intelligence services and those of our partners (…), it is impossible to seize our state without internal destabilization”, he argued.

Earlier in the day, Oleksiï Danilov had indicated that the state of emergency would allow the authorities to “strengthen protection” public order and strategic infrastructures, “limit the circulation of transport”step up verification of citizens’ vehicles and documents.

“It will not have a drastic impact on daily life” Ukrainians, he said at the time.

Faced with the Russian threat, Ukraine seeks the support of the United Nations.

He also stressed that Ukraine was not a threat to Russia:

“The only, and I want to emphasize, the only reason for Ukraine to strengthen its defenses is the threat of military operations planned by Russia. Moscow’s actions and statements are outrageous, terrible and go well with the beyond the threat to Ukraine. In fact, in his speech, Russian President Vladimir Putin openly denied Ukraine’s right to exist.”

“The start of a full-scale war in Ukraine will be the end of the world order as we know it,” warned Dmytro Kuleba, asking the members of the United Nations not to recognize the independence of the Donetsk and Lugansk regions.

“Russia must find the path of diplomacy”,withdraw its troops, stop destabilizing the region”, demanded the Ukrainian minister. “We want peace!”, launched at the end of his long speech Dmytro Kuleba, strongly applauded.

the UN warns of a “peril”

UN Secretary General Antonio Guterres said the world was facing “at a time of peril” with the crisis between Russia and the West around Ukraine, which called for the withdrawal of Russian troops.

For the UN chief, “Russia’s decision to recognize the so-called independence of the Donetsk and Luhansk regions, are violations of the territorial integrity and sovereignty of Ukraine and are incompatible with the principles of the United Nations Charter” .

The General Assembly meeting attended by the 193 UN members on Wednesday is an annual session on the “temporarily occupied Ukrainian territories”, organized since the 2014 annexation of Crimea by Russia.

“It is the future of European security that is at stake in Ukraine”, he added.

“We understand this, and we are aware that Ukraine is not part of any security alliance. We will defend ourselves with the support of our partners. But it is the Ukrainians who are dying. “That’s why we need clear and precise security guarantees immediately. Because we want to be sure that we can protect our people and our homes”, explained Volodymyr Zelensky.

Kiev announced on Wednesday the mobilization of its reservists aged 18 to 60 and the establishment of a “national state of emergency”.

Russia, for its part, has begun to evacuate its diplomatic personnel from Ukraine, and the Russian flag no longer flies over its embassy. The United States had already closed theirs.

Russian President Vladimir Putin hammered to him on Wednesday that Russian interests were “non-negotiable”even though he mentioned a hypothetical “direct and honest dialogue with Westerners”.

Westerners believe that Russia, which has massed 150,000 soldiers on the Ukrainian borders, could launch a major operation, including to take Kiev, the capital.

War in Ukraine: the inhabitants of Lutsk face the bombardments of the Russian forces