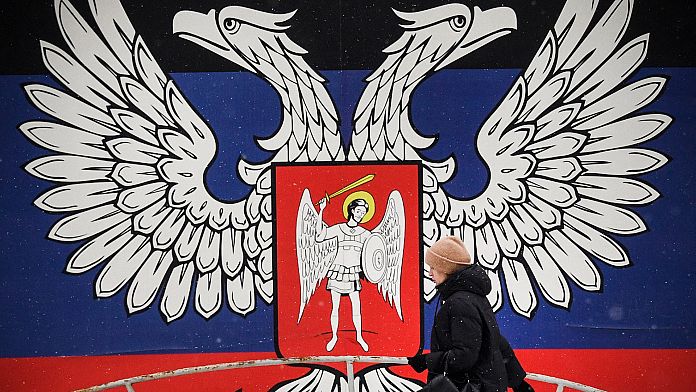 Since Moscow recognized the independence of the pro-Russian separatist republics of Donetsk and Lugansk, doubts hang over the definition of the territories of these two entities. The Kremlin clarified its interpretation on Tuesday evening. Vladimir Putin has, in fact, affirmed that Russia recognizes the sovereignty of the two separatist republics over all regions “as they were when they were part of Ukraine“, i.e. Donetsk and Lugansk Oblasts.

The separatists currently control much smaller areas, as shown in the map above, defined by the Minsk agreements (2014 and 2015), negotiated between Russia and Ukraine under Franco-German mediation. The line of contact, separating these entities from the rest of Ukraine, was defined by the Minsk memorandum of September 19, 2014, with the establishment of a demilitarized zone of 15 km on each side of this border. OSCE observers were in charge of monitoring the truce of hostilities, in exchange for autonomy for the separatist areas, according to the provisions of the Minsk agreements aimed, ultimately, at a return to Ukrainian sovereignty of these areas.

But since Vladimir Putin, defying the threat of Western sanctions, recognized the independence of these separatist territories, the Minsk agreements are obsolete from the Russian point of view. And the latest statements by the master of the Kremlin therefore open the door to an attempt to take control of the parts of these regions controlled by Ukrainian authorities, in particular the city of Mariupol, which has more than 400,000 inhabitants.

The international community strongly criticized the Russian decision. UN Secretary General Antonio Guterres considered that Moscow’s recognition of a “so-called independence“of separatist areas was”a violation of the territorial integrity and sovereignty of Ukraine” and one “mortal blow” brought to the Minsk agreements endorsed by the UN Security Council.

The two self-proclaimed republics Donetsk and Lugansk are located in the Russian-speaking Donbass mining basin in eastern Ukraine. De facto, they have therefore escaped Kyiv’s control since 2014. The war that has pitted the separatists against the Ukrainian authorities since then has claimed more than 14,000 lives.

The Donbass is also at the heart of a cultural battle between Kiev and Moscow, which argues that this region, like a large part of eastern Ukraine, is populated by Russian speakers who must be protected from Ukrainian nationalism.

The Donbass basin, bordering Russia and located on the northern shore of the Black Sea, harbors immense coal reserves. The presence of Russian speakers there is particularly linked to the sending of many Russian workers after the Second World War during the Soviet period.

Donetsk (formerly Stalino), is the main city of the Donbass mining basin, as well as one of the main metallurgical centers of Ukraine. It has two million inhabitants.

Lugansk (formerly Voroshilovgrad), an industrial city, has a total of 1.5 million inhabitants.

Who are the leaders of the two breakaway republics?

Denis Pushilin, elected in 2018 in a ballot denounced by Kiev, leads the self-proclaimed People’s Republic of Donetsk (DNR).

Leonid Passetchnik is the head of the self-proclaimed Republic of Lugansk (LNR).

“I call on my fellow reservists to report to the military conscription offices. Today I signed the general mobilization decree“, announced Denis Pouchiline.

A few minutes later, Leonid Passetchnik signed a similar decree calling for the mobilization of men aged 18 to 55 in order to prepare, according to him, for “repel an attack“.

Many warlords and separatist leaders have been killed in recent years in attacks, victims of internal struggles or even of operations of the Ukrainian special services, according to unverifiable versions. The most striking case is that of the previous strongman of Donetsk, Alexander Zakharchenko, killed in 2018 in an explosion.

The shadow of Russia

Russia is seen as the instigator of the conflict and the godfather of the separatists, with the war erupting on the heels of Russia’s annexation of the Crimean peninsula after pro-Westerns came to power in Kiev in early 2014.

Westerners accuse the Kremlin, which according to them has positioned around 150,000 soldiers on the Ukrainian borders, of seeking a pretext – even if it means staging it – to justify an armed intervention.

Moscow has favored separatism in several former Soviet republics since the fall of the USSR, notably recognizing after its lightning war in Georgia in 2008 the independence of two pro-Russian territories, South Ossetia and Abkhazia.