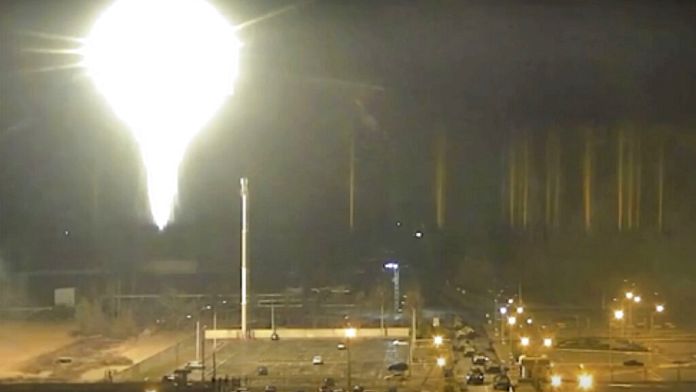 The war in Ukraine has taken another step.

The Zaporizhia nuclear power plant is now in the hands of the Russian army. The site was bombed on Friday at dawn. A fire broke out but there was no radioactive leak. An “irresponsible” attack for NATO which calls on Vladimir Putin to end this war.

However, there is no question of creating a no-fly zone in Ukraine, a request from Kiev.

“The Allies have agreed that we should not have NATO planes operating in Ukrainian airspace or NATO troops on the ground because we could end up with an all-out war in Europe“, has explained Jens Stoltenberg, the Secretary General of NATO.

Ukrainian President Volodymyr Zelenskyy accused Moscow of using “nuclear terror” and called for “immediate European action” to “prevent Europe from dying from a nuclear disaster”. “An immediate reinforcement of sanctions against the nuclear terrorist state is necessary,” he urged in a video released by the Ukrainian presidency.

“Russian troops attacked the nuclear power plant in Zaporizhia, the largest in Europe. On its own, it could be like six Chernobyls. The Russian tanks knew what they were shooting at. Aiming directly at the power plant, it’s an unprecedented level of terror“ hammers the Ukrainian president, Volodymyr Zelenskyy.

What raise many fears and lead to an emergency meeting of the UN Security Council. Russia accuses Ukraine of sabotaging its own plant:

Faced with “an unprecedented situation”, the head of theInternational Atomic Energy Agency (IAEA) offered to go to Ukraine to negotiate a solution with the Russians in order to guarantee the security of nuclear sites. “This is the first time that a military conflict has taken place in a country with a large nuclear program“, he said.

Ukraine has fifteen reactors in four power plants and several other sites. That of Chernobyl, site of the worst nuclear disaster in history in 1986, fell into the hands of Russian troops last week.

On this ninth day of war, Russian troops are keeping up the pressure and the conflict is now engulfing the whole of Ukraine.

Fighting continues at Chernigivnorth of Kiev where Ukraine accuses Mosc or of having bombed a residential area and schools on Thursday, killing 47 people.

“Critical” situation at Okhtyrka and Sumytwo cities in the east of the country.

Kharkov, Ukraine’s second largest city is still under bombardment. According to the NGO Human Rights WatchRussian forces allegedly used cluster munitions, the use of which constitutes a war crime.

When at the strategic port of Mariupolthe mayor accuses the Russian forces of wanting to establish a blockade and speaks of a “terrible” humanitarian situation after 40 hours of uninterrupted bombing.

According to the UN, more than 1.2 million Ukrainians have already fled their country.

The Russian army continues its intense offensive in the Donbass