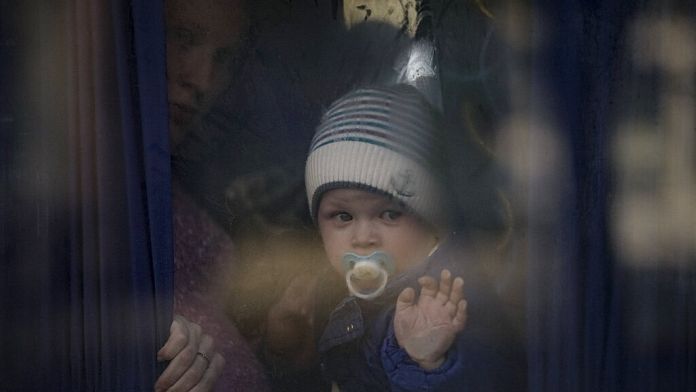 The war in Ukraine is (also) thousands of inhabitants who, every day, flee the combat zones. Families, children, uprooted, tired by the journey and (very often) traumatized by the violence.

This train entering Lviv station is arriving from Zaporizhia in southeastern Ukraine. On board, families fleeing the fighting. Many of them lived in Mariupol, a city besieged by the Russian army.

At the risk of their lives, these people managed to get out of what they call “the hell of Mariupol”.

When not by trainit is by coach or by carthat people move towards less exposed regions.

We are here in Brovary not far from Kyiv.

Serhiy holds her two children in her arms. He comes from Bobryk, a village in the east of the country. An area now under Russian control.

“The occupants make themselves at home, he says, and I couldn’t stand that. We had no more water, no more electricity. __It was very hard! We stayed like that for a week.“

Ukrainian refugees in a few figures

Many of them remain in Ukraine, hosted by relatives in quieter towns or villages.

And then there are those who flee abroad – more than 3.2 million Ukrainians, again according to United Nations agencies.

They mainly take refuge in Poland or in Romaniabefore -sometimes- continuing their migration further west.

The past seven years have been the hottest on record

In Beijing, despite the Covid, go out at all costs