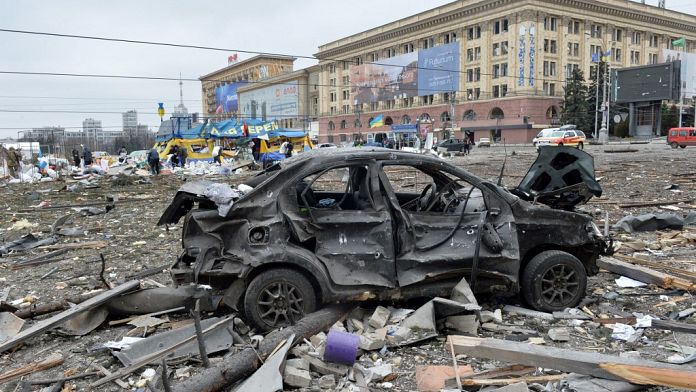 The pressure remains strong on the main cities of the country. On the seventh day of the Russian invasion, the Ukrainian army reported the landing overnight from Tuesday to Wednesday of Russian airborne troops in Kharviv, the country’s second city. Update on the latest developments in the war in Ukraine.

“Russian airborne troops landed in Kharkiv (…) and attacked a hospital” local, the Ukrainian Armed Forces said in a statement on Telegram. “A fight is underway between the invaders and the Ukrainians”according to the press release.

According to Anton Gerashchenkoadviser to the Ukrainian Interior Minister, a fire broke out on Wednesday in the barracks of a flight school in Kharkiv after an airstrike.

“Practically there is no such area left in Kharkiv where an artillery shell has not yet hit”he said, quoted in a statement on Telegram.

Kharkiv, a city of 1.4 million people near the border with Russia, was targeted by several bombings on Tuesday, which left at least ten dead and more than 20 injured according to local authorities.

In Kyivthe Russian army has called on civilians living near security services infrastructure to evacuate, saying it wants to attack them to stop “computer attacks against Russia”.

The future Russian assault on Kiev raises fears of a considerable number of victims in this metropolis, which normally has nearly three million inhabitants and is endowed with a rich historical heritage.

On Tuesday, five people died in the capital when the television tower was targeted in the late afternoon. But most Ukrainian channels quickly resumed broadcasting.

Photos from the American satellite imagery company Maxar show a Russian convoy stretching for tens of kilometers and heading towards the capital.

“We have the general feeling that the movement of the Russian army (…) towards Kyiv has stalled at this stage,” however, an official from the US Department of Defense said, referring to the Ukrainian resistance but also to problems “logistics”food and fuel supply.

On the other hand, Russian forces seem to have progressed in southern Ukraine, on the shores of the Sea of ​​Azov.

In the port of Mariupol, “all neighborhoods” are bombed, said the regional governor, citing an unknown number of deaths.

The Russian Ministry of Defense claimed that its troops advancing on the coast from Crimea had joined those of the pro-Russian separatist territory of Donetsk, giving them strategic territorial continuity — information that could not be immediately verified.

“Belarusian troops have been put on high alert and are in the concentration areas closest to the border with Ukraine”said the Ukrainian ministry in a statement on Facebook.

During the day on Tuesday, Ukrainian intelligence noted “significant activity” of aircraft in the border area, and convoys of vehicles carrying food and ammunition were observed there, the statement said.

In view of these movements, Belarus “could probably support Russian invaders in the Russian-Ukrainian war in the future”, warned the ministry. From “missile attacks against military and civilian targets” in Ukraine have been “systematically” launched from Belarusian territory since the start of the Russian invasion on February 24, he added.

On Tuesday, the President of Belarus, Alexander Lukashenko had however indicated to the national press agency Belta that his country had no intention of joining the Russian military operation in Ukraine.

Dutch dockers with Ukraine: they refuse to unload a cargo of Russian diesel