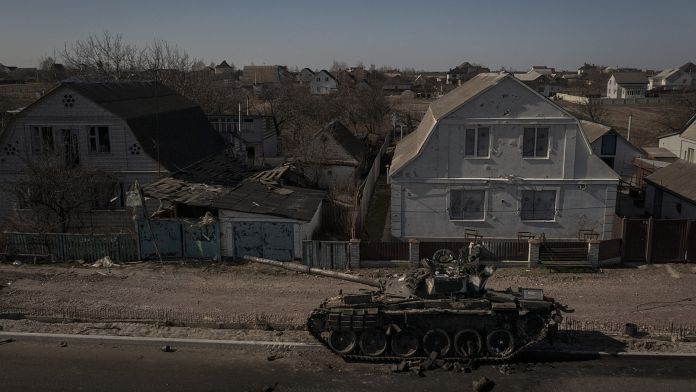 Situation on the ground, international reactions, sanctions: the point, this Saturday March 12, 2022, on the invasion of Ukraine by Russia.

Anti-bombing sirens sounded throughout the night throughout the Ukrainian territory, including the major cities of Odessa, Dnipro, Kharkiv and, of course, Kyiv. As of Saturday morning, Russian forces were positioned around the Ukrainian capital and ‘blockaded’ the port city of Mariupol, which has been under siege for more than 10 days now..

The Russian army on Friday extended its offensive to the large city of Dniproan industrial city on the Dnieper, a river that marks the separation between the partly pro-Russian East and the rest of the country.

“There were three airstrikes on the city, on a kindergarten, an apartment building and a shoe factory (…) where a fire then broke out“, said the Ukrainian emergency services.

The Ukrainian capital as well as Mariupolon the Sea of ​​Azov, Kryvy Rig, Kremenchug, Nikopol and Zaporizhia are the main areas where the efforts of the Russians are still concentrated, according to the Ukrainian army. Moscow seeks according to her to eliminate the Ukrainian defenses in several localities to the west and north of the capital, Kyivto “block” the city.

Zelensky appeals to the mothers of Russian soldiers

Ukrainian President Volodymyr Zelensky called on the mothers of Russian soldiers on Saturday to prevent their sons from being sent to “war” in Ukraine.

“I want to say this once again to Russian mothers. Particularly, to the mothers of conscripts. Do not send your children to war in a foreign country“, said Mr. Zelensky, in a new video address broadcast on Telegram.

“Check where your son is. And if you have the slightest suspicion that your son could be sent to war against Ukraine, act immediately“to prevent him from being killed or captured,” he said.

Mariupol, a strategic port in southern Ukraine, surrounded and constantly bombarded by the Russians, is in a situation “desperate“, according to a senior official of MSFwhich calls for action to avoid “an unimaginable tragedy“.

“Hundreds of thousands of people (…) are literally besieged“, declares Stephen Cornishthe boss of MSF Switzerland and one of the coordinators of the NGO’s action in Ukraine since the beginning of the Russian invasion on February 24.

Joe Biden announced that the United States and its allies have decided to exclude Russia from the normal reciprocity regime governing world trade, which opens the way for the imposition of severe tariffs.

The US president also wants to ban imports of Russian vodka, diamonds and seafood.

Emmanuel Macron warned, after the EU summit in Versailles, that the Europeans were ready to take “massive penalties“against Russia if the war continued.

The president of the United States Joe Biden pledged on Friday to “to avoid” a “direct confrontation between NATO and Russia“because it would provoke”The Third world war“.

“We are not going to wage a war against Russia in Ukraine“, hammered the American leader from the White House.

The mayor of Melitopol was abducted on Friday by Russian soldiers occupying the southern Ukrainian town, Ukrainian officials said, a report confirmed by the president Volodymyr Zelensky.

“A group of ten occupiers kidnapped the mayor of Melitopol Ivan Fedorov“, said on its Twitter account the Rada, the Ukrainian Parliament. “He refused to cooperate with the enemy“, she added.

“This is obviously a sign of weakness of the invaders (…) They have moved to a new stage of terror in which they are trying to physically eliminate the representatives of the legitimate local Ukrainian authorities“, underlined Mr. Zelensky.

Syrian fighters on the Russian side

The Kremlin allows Syrian nationals to volunteer to fight in Ukraine. The volunteers areabove all people from the Middle East, Syrians“, clarified the Kremlin.

“You have to meet them and help them reach the combat zone.“, said Vladimir Putin.

Zelensky thanks Warsaw for its support

“When you are hurt, it is very important to have someone to lean on. And when the enemy sets foot in your house, someone reaches out to you. On the morning of February 24, I had no doubt who would say to me “Brother, you will not find yourself alone against the enemy“, declared the Ukrainian president in this message addressed to the president Andrzej Dudato the Parliament and to the people of Poland.

The G7 countries have asked the international community to avoid any measure limiting food exports so as not to aggravate the current rise in prices on this market destabilized by the war in Ukraine.

The French President Emmanuel Macron warned that Europe and Africa “will be very deeply destabilized in terms of food“in the next 12 to 18 months because of the war.

The Food and Agriculture Organization of the United Nations has estimated that an additional eight to 13 million people could suffer from undernutrition worldwide if food exports from Ukraine and Russia are permanently blocked.

More than 2.5 million people have fled Ukraine since the start of the invasion, more than half of whom have been received in Poland, and around two million have been displaced within Ukraine itself, according to the United Nations High Commissioner for Refugees (UNHCR).

CAN 2022: 8 dead and several dozen injured in a stampede in front of a stadium in Cameroon