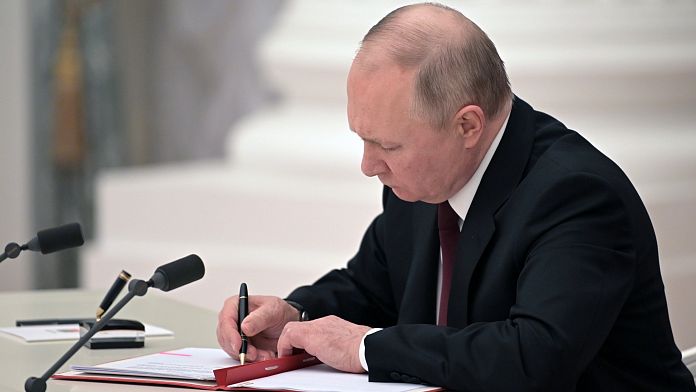 I’UN and a majority of members of the Security Council condemned Monday at an emergency meeting the decision of the Russia to recognize the independence of the independence of the People’s Republics of Donetsk and Lugansk (DNR and LNR), pro-Russian Ukrainian separatist regions, and to “deploy Russian troops”Moscow ensuring to remain “open to diplomacy”.

“Ukraine’s internationally recognized borders will remain unchanged regardless of Russian statements and actions”said the Ukrainian ambassador to the UN, Sergiy Kyslytsya. Ukraine asks Russia “to cancel its recognition decision” Ukrainian secessionist territories, “to return to the negotiating table”and proceed to “an immediate and verifiable withdrawal of its occupying troops”he added.

The designation of the Russian army by President Vladimir Putin in “peacekeeping force” to justify its entry into the separatist territories of eastern Ukraine, is “a nonsense”the United States ambassador to the United Nations had previously declared Linda Thomas Greenfield.

President Putin “has since announced that he will deploy Russian troops in these areas. They call them peacekeeping forces. This is nonsense. We know what they really are”castigated the American diplomat.

Russia does not close the door to “diplomacy”

“The next few hours and days will be critical. The risk of major conflict is real and must be avoided at all costs”she claimed during the meeting organized at the request of Westerners in particular.

Russia does not close the door to “diplomacy” to resolve the crisis in Ukraine but will prevent a “bloodbath” in the separatist territories in the east of the country whose independence Moscow has just recognized, assured the Russian ambassador to the UN, Vassily Nebenzia.

“We remain open to diplomacy, for a diplomatic solution. However, we do not intend to allow a bloodbath in the Donbass”said the Russian diplomat.

Russia also assured this Tuesday morning to be always “ready“to negotiations with US Secretary of State Antony Blinken, who is due to meet his Russian counterpart Sergei Lavrov in Geneva on Thursday, after Moscow’s recognition of the pro-Russian Ukrainian separatist regions.

“Even in the most difficult moments… we say: we are ready for the process of negotiations, that is why our position has remained the same (…). We are always for the use of diplomacy“said Russian Foreign Ministry spokeswoman Maria Zakharova.

During the meeting, several members of the Security Council expressed their condemnation of the latest developments, such as the Franceof the Norway orIrelandincluding the ambassador, Geraldine ByrneNasonsharply criticized Moscow. “Russia’s unilateral actions only exacerbate tensions”she launched.

For France, Russia has “chosen the path of questioning and confrontation”lamented the French ambassador, Nicolas de Riviere.

“Who’s next” to have to be invaded?, wondered for his part in a more direct way the Albanian ambassador, Ferit Hoxhacondemning “a breach of international law”.

His Indian counterpart, TS Tirumurtishared “of his deep concern” and called “to the restraint of all parties”while the British Ambassador, Barbara Woodwarddemanded that Russia do “reverse” and that the Brazil asked “an immediate ceasefire” in eastern Ukraine.

“This action” to enter eastern Ukraine militarily “and this announcement” recognition of independence “undermine the territorial integrity of Ukraine”, said the Kenyan Ambassador, Martin Kimani.

“Kenya is seriously concerned”he added. “Today the threat or use of force against the territorial integrity and political independence of Ukraine has been affected”denounced the Kenyan diplomat.

China calls on all parties “withholding”

China has distinguished itself from its partners by not explicitly condemning Russia. “We believe that all countries should resolve international disputes by peaceful means in accordance with the purposes and principles of the Charter of the United Nations”limited himself to saying the Chinese ambassador, Zhang Jun.

“All parties involved should exercise restraint and avoid any action that could fuel tensions”he added before the Security Council.

Collective suicide? Four members of a family throw themselves from a balcony in Switzerland