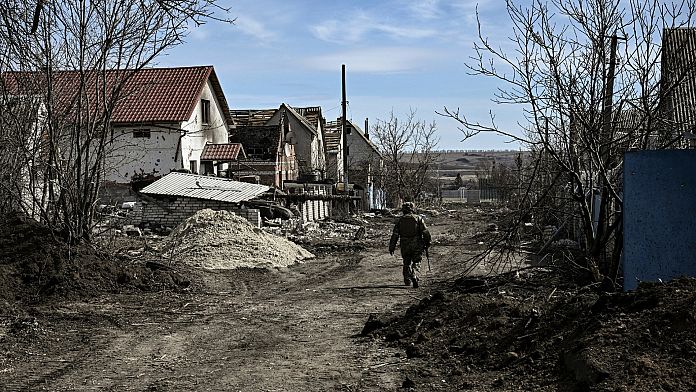 Since Russia realized that winning the war was not going to be so easy, the strategy changed. Faced with fierce resistance from Ukrainian troops, the Russian army has entered into a war of attrition which it hopes to win by force and destruction.

Like a Bashtanka, near Mykolaiv, a key city in the south of the country where the Russian advance stopped. After fierce fighting, the city is again under Ukrainian control:

“It was my house (…) All the houses were destroyed and people left. Nothing worse could happen to us“explains a resident of this locality of more than 10,000 inhabitants

The Ukrainian authorities are concerned about a worsening of the situation in the besieged port of Mariupol where 160,000 people would still be stranded. “All entrances and exits from the city are blocked (…) it is impossible to bring food and medicine into Mariupol“, affirmed this Sunday evening the president Zelensky.Russian forces bomb humanitarian aid convoys and kill drivers“, he added, indicating that the streets were littered with “corpses” that were impossible to bury.

“The population is struggling to survive. The humanitarian situation is catastrophic“, affirmed for his part Dmytro Kouleba, the Ukrainian Ministry of Foreign Affairs, adding that “russian armed forces are turning the city to dust“.

This Monday, an adviser to the Ukrainian presidency in charge of humanitarian corridors announced that in Mariupol “about 5,000 people were buried, __but people have not been buried for ten days due to continuous shelling“. In addition Tetiana Lomakina, felt that”given the number of people still under the rubble (…) there could be around 10,000 dead“.

Around kyiv, new battles are taking place in particular in Stoyanka, west of the capital. “The enemy is trying to break through around kyiv and block the roads“, said Ganna Malyar, Deputy Minister of Defense on Ukrainian television, assuring that “the defense of kyiv” continued.

Two high-voltage lines were damaged in the fighting, depriving 82,000 inhabitants of the right bank of the capital of electricity.

On the Russian side, the Defense Ministry says the military has shot down 19 planes in the past 24 hours. Destruction and a number of victims difficult to verify. In Ukraine, the funerals of soldiers killed in action follow one another. In Russia, no doubt too.

Will this war of attrition weigh on the next negotiations? A new meeting between Russians and Ukrainians is scheduled for Tuesday in Turkey. Objective: to try to stop a conflict which has already forced almost 4 million Ukrainians to flee their country according to the UN, and caused some 63 billion in damage to the country’s infrastructure, according to a study by the School of Economics of kyiv.

One of the important points of the negotiations, which should begin on Tuesday, concerns “_security guarantees and neutrality, the denuclearized status of our State”, President Zelensky told Russian media on Sunday.

A negotiating session had already taken place on March 10 in Turkey, in Antalya, at the level of foreign ministers, but had not resulted in any concrete progress. Since then, discussions have continued by videoconference, deemed “difficult” by both sides.