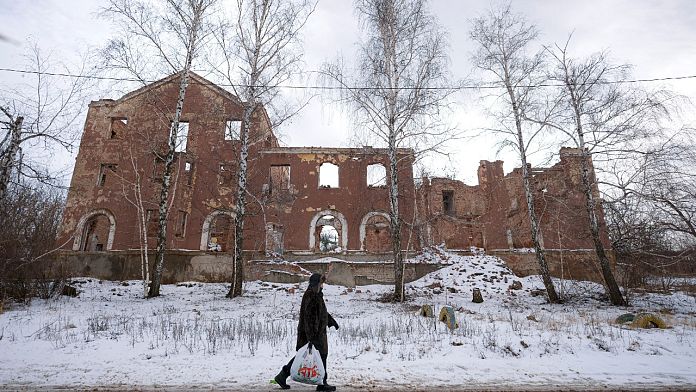 As the world braces for a possible Russian incursion into Ukraine, Sloviansk – like much of the country’s east – is still struggling to recover from eight years of conflict.

This city of just over 100,000 people was the scene of heavy fighting in 2014, when Russian-backed separatists took control of the region.

Vlada Lysenko was 15 at the time and remembers a city under siege.

“People were inside the police station with automatic weapons and uniforms. We didn’t understand what was going on… There were a lot of people. There were tires and barricades…”, says Vlada. “__We avoided all the multi-storey buildings because there were snipers up there. We tried not to be in an open space, because we didn’t know when a bullet was going to come.”

It took nearly three months for the Ukrainian Armed Forces to retake Sloviansk. The separatists then moved 100 km to the south, from where they continue to fight today.

Throughout this region, the signs of a war that began eight years ago are still visible and the memories still fresh.

Roman was 20 when he was hit by a sniper on the front line. His mother testifies at the microphone of Euronews. “He was a shy and quiet person. But he had something in him. A sense of responsibility towards others. He was morally ready to protect Ukraine. He said mum, if it’s not me, then Who ?” (…) __”Of course the death of young people is sad and very painful. But the independence of Ukraine is worth it.”

If Sloviansk has been taken over, Luhansk and Donetsk, the regional capitals remain in the fold of pro-Russian forces. A front line bisects the region, once one of the most prosperous in Ukraine.

Not the fault of the people, but perhaps that of their leaders….In the event of a Russian offensive, no one really knows what will happen to Sloviansk and its inhabitants.