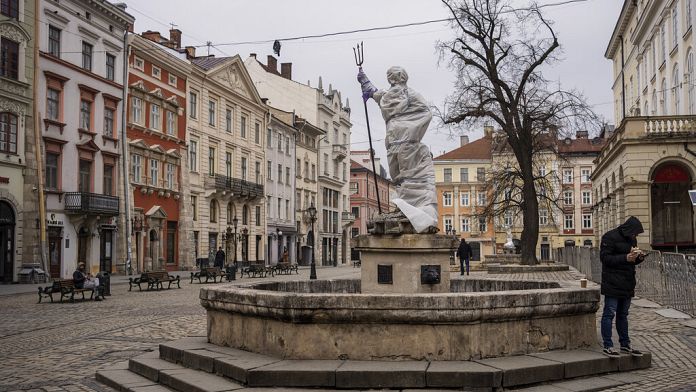 The port city ofOdessa remains under Ukrainian control and has so far been spared the fighting. But fears have emerged over a possible attack and the landing of Russian soldiers currently stationed on warships off in the Black Sea. So, on the shore, the locals pile up sandbags and get ready. Everyone shakes hands.

“I’m here to protect the city. I help with cooking, filling sandbags and cleaning. Over there is my house. We have to defend it, that’s how we were brought up!“, recount Juliaa young resident of Odessa.

About 800 km from Odessa in western Ukraine is Lviv. There, the inhabitants wrap in tarpaulins and moss, statues, stained glass windows and other cultural monuments of the city in order to protect them against a possible Russian attack.

“You know, it takes time to get to Lviv, Russian troops will not reach the city quickly. But if we talk about small nuclear strike, then I think Lviv could be a target“, says Khristina Gorbachevskaa pensioner who lives in Lviv.

Lviv is the largest city in western Ukraine. It has become the fallback solution for foreign diplomatic missions, journalists and Ukrainians seeking safety or fleeing to a neighboring country.

488 journalists imprisoned around the world in 2021, a record (Reporters Without Borders)

Report on the Hungarian border: a village mobilizes to welcome Ukrainian refugees

Massacre of civilians in Boutcha: residents testify to the horror