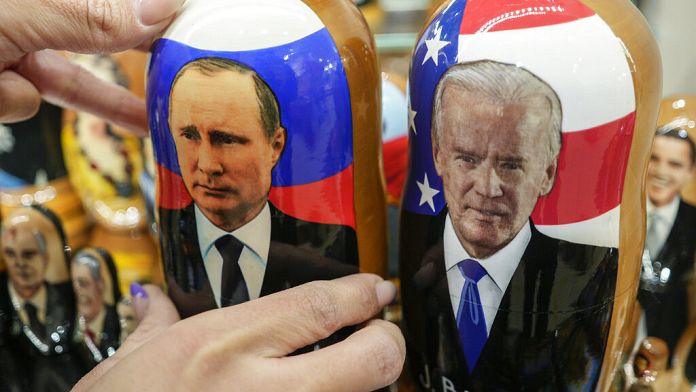 Russian President Vladimir Putin speaks again on the phone on Saturday with his American counterparts Joe Biden and French Emmanuel Macron, while a war in Ukraine could break out “at any time”, according to Washington.

Faced with the threat of a Russian invasion of Ukraine, presented as imminent, the telephone bells are ringing louder on both sides of the Atlantic in an attempt to relaunch dialogue.

President Biden, who is spending the weekend at the Camp David residence, will meet with Vladimir Putin on Saturday following a phone call Friday between their respective chiefs of staff. A call is also planned for Saturday between the master of the Kremlin and Emmanuel Macron.

“We continue to see signs of Russian escalation, including the arrival of new forces on the Ukrainian border,” White House national security adviser Jake Sullivan warned after a virtual meeting of top Western leaders.

“An invasion could occur at any time if Vladimir Putin gives the order”, he added, assuring that it could even “start during the Olympic Games” in Beijing which end on February 20.

According to him, such an offensive is a “very, very real possibility”, but American intelligence does not know whether the Russian president “has made a final decision” or not. “No one knows if a decision to act has been taken,” a NATO diplomat told AFP.

Joe Biden’s adviser reaffirmed that Westerners were “ready for all scenarios”: unprecedented economic reprisals in the event of war but also an outstretched diplomatic hand to continue negotiations with Moscow.

In the meantime, the Pentagon will send “in the coming days” 3,000 additional American soldiers to Poland to “reassure the NATO allies”.

And the head of American diplomacy Antony Blinken assured his Ukrainian counterpart Dmytro Kouleba on Friday of the “firm support” of the United States in Kiev.

Several rounds of talks in recent days have failed to defuse the crisis, born of the deployment in recent months on the borders of Ukraine of more than 100,000 Russian soldiers with heavy weapons.

“The allies are determined to take swift and drastic sanctions together against Russia” in the event of an attack, tweeted, after the meeting of Western leaders, the spokesman for German Chancellor Olaf Scholz, who is due to go at the start of next week in Moscow.

Like Paris, Berlin insisted on the “diplomatic” way to move towards a “de-escalation”.

The White House has praised the “remarkable” unity of Westerners in the face of what they consider to be the most dangerous moment for Europe since the end of the Cold War thirty years ago.

The Americans, who shared the analyzes of their intelligence services with their allies, sketched out a dramatic scenario in the event of a Russian offensive.

This “would probably start with aerial bombardments and missile strikes which could obviously kill civilians,” said White House adviser Jake Sullivan. It could also include “a rapid assault” on Kiev.

The United States, Canada and Australia have called on their nationals to leave Ukraine as soon as possible. “This is a very dangerous situation, and for your own safety you must seek to get out of Ukraine. The situation will become very volatile if there is a conflict,” Australian Prime Minister Scott Morrison warned Saturday at the intention of his fellow citizens.

Friday, the Kremlin noted that discussions bringing together the day before in Berlin representatives of Russia, Ukraine, Germany and France had produced “no result”.

These discussions focus on the conflict in eastern Ukraine which has pitted Russian-backed separatists against the Ukrainian army since 2014, and has left more than 14,000 dead.

Moscow, which has already annexed Crimea in 2014, denies any aggressive intentions towards Ukraine, but conditions any de-escalation on a series of requirements, in particular the assurance that Kiev will never integrate NATO. Unacceptable, say Westerners.

While Emmanuel Macron assured that he had obtained a commitment from Vladimir Putin on Monday not to fuel any further escalation, Russia announced new military maneuvers on the Ukrainian border on Friday. The Russian navy also conducts maneuvers in the Black Sea, of which Ukraine is bordering.

15 years after the assassination of Anna Politkovskaya, more hope to judge the sponsors