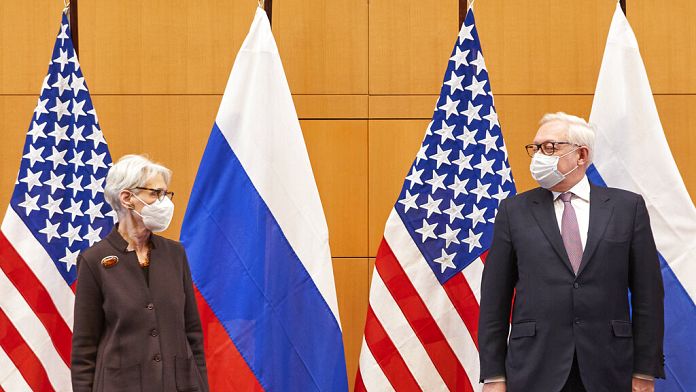 Russia assured Monday that it did not “intend” to attack Ukraine, after talks with the United States, the two camps ensuring that they want to continue their talks with a view to de-escalation, while repeating their warnings. mutual custody.

Negotiations in Geneva, Switzerland, were led by the two countries’ deputy foreign ministers, Wendy Sherman and Sergei Riabkov, after weeks of war of words, with the West accusing the Russians of wanting to invade Ukraine and Moscow. reproaching NATO for threatening its security by strengthening its presence in this neighbor of Russia.

Against the backdrop of these negotiations, two Ukrainian soldiers were killed Monday after jumping on an explosive device in eastern Ukraine. These are the first soldiers killed this year on the front line with the pro-Russian separatists.

After the meeting in Geneva, the Russian negotiator assured that his country had no intention of attacking Ukraine and that the tens of thousands of troops deployed at the borders were a reaction to the increased presence of its Western rivals.

“We explained to colleagues that we have no plans, no intention to attack – in quotes – Ukraine“, said Sergei Riabkov.

Wendy Sherman explained that she reiterated to her counterpart that any invasion of Ukraine would result in “significant costs“,”huge“, for Russia and that Moscow could initiate a”de-escalation” in “sending the soldiers back to their barracks“gathered at the border in recent weeks.

Regarding Russia’s key demand, namely obtaining security guarantees by banning any NATO enlargement and reducing the Western military presence in the vicinity of Russia, the Russian negotiator was more positive than the day before.

“We have the impression that the American side took the Russian proposals very seriously.“, he said.

According to him, “the situation is not hopeless“so, but”the risks linked to a worsening of the evolution of the confrontation should not be underestimated“.

“A real gesture towards Russia must be made“, he hammered, assuring that”never ever“Ukraine must not join the Atlantic Alliance. For him, concessions must be made”quickly“, the negotiation process should not take”months and years“.

For her part, Ms. Sherman explained that the American side had presented its ideas “from which our two countries could take reciprocal measures consistent with our security interests and likely to improve strategic stability“. Again a more conciliatory tone.

The diplomat warned Moscow, however, that the “open door policy“NATO would continue despite Russian demands.

The chief of the American diplomacy, Antony Blinken, had him hurry sunday President Vladimir Putin to avoid a news “aggression“against Kiev and to privilege”diplomacy“.

Monday’s talks in Geneva kick off an intense diplomatic week. A NATO-Russia meeting is scheduled for Wednesday in Brussels, before a meeting Thursday in Vienna of the Organization for Security and Cooperation in Europe (OSCE), an East-West dialogue platform resulting from the Cold War.

In a muddy trench at the front, a Ukrainian soldier had no illusions about the Westerners’ ability to push Moscow back.

“Guarantees on non-NATO membership will not stop“Vladimir Putin, estimated Mikhaïlo, 29 years old.”He wants to come to a Soviet Union 2.0.“

The West threatened the Kremlin with sanctions “massive“in the event of a new aggression against Ukraine, when Moscow has already annexed in 2014 part of its territory, Crimea, in reaction to a pro-Western revolution in Kiev, and is accused of supporting the separatists from the east from the country.

Mr. Putin, who spoke twice with his American counterpart Joe Biden in December, warned that further sanctions against his country would be a “colossal mistake“. He had also threatened with a” _military and technical “response.very clearly aggressive line maintenance“of its Western rivals.

The Kremlin says the West is provoking Russia by stationing the military at its gates and arming the Ukrainian army.

He therefore calls for two treaties to prohibit any future expansion of NATO and the end of Western military maneuvers near Russian borders.

On Monday, receiving Ukrainian Deputy Prime Minister Olga Stefanichyna, NATO Secretary General Jens Stoltenberg said this week’s talks were not going to solve all the problems, but that the hope was to settle “agree on a way forward.“