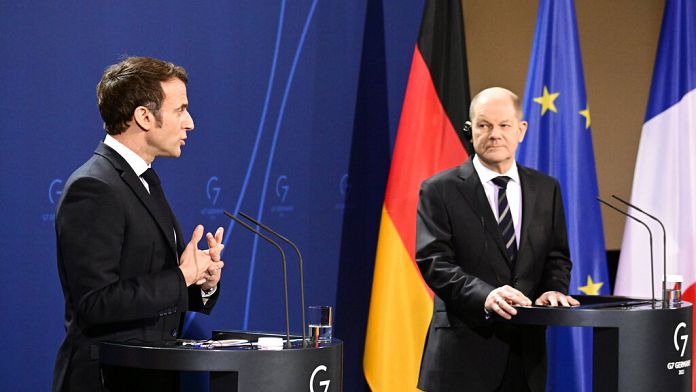 Before his trip to Moscow and Kiev, Emmanuel Macron spoke this Saturday about the Russian-Ukrainian crisis with British Prime Minister Boris Johnson and NATO Secretary General Jens Stoltenberg, announced the Elysée.

These separate telephone exchanges are part of “in a context of constant consultation between allies on the tensions between Ukraine and Russia“, indicated the French presidency.

“We will not obtain unilateral gestures” from Russia

With Mr. Stoltenberg, Emmanuel Macron insisted on “the need to continue the work to find, through dialogue, a path of de-escalation, in unity, with full respect for the fundamental principles of European security, the sovereignty of States and the rights which derive therefrom“, according to the Elysee.

“The recent period has confirmed that when you decide not to talk, which was the choice of the Europeans last year when Chancellor Merkel and myself proposed an EU-Russia summit, then you cannot settle any conflict . Because we then let others speak on our behalf and we cannot contribute to our collective security either.“, estimated Emmanuel Macron in the JDD.

He will try to obtain advances during his meetings with Russian Presidents Vladimir Putin on Monday in Moscow and Ukrainian Volodymyr Zelensky the next day in Kyiv.

“The intensity of the dialogue we have had with Russia and this visit to Moscow are likely to prevent“An armed conflict, believes Emmanuel Macron.

“Next, we will discuss the terms of de-escalation. You have to be very realistic. We won’t get unilateral gestures but it is essential to avoid a deterioration of the situation before building mechanisms and gestures of mutual trust“, according to him.

A call to Biden with meeting Vladimir Putin

Before flying to Moscow, Emmanuel Macron spoke on the phone for 40 minutes this Sunday with US President Joe Biden. An exchange that fits “in a logic of coordination“, according to the French presidency.

The two men had already spoken to each other on Tuesday, mutually affirming “their support for the sovereignty and territorial integrity of Ukraine“and pledging to stay”in close contacton this file, according to the White House.

“They agreed to speak again soon.“, said Sunday the Elysée.

Joe Biden also welcomes German Chancellor Olaf Scholz on Monday, Berlin seeking to strengthen its influence in the Ukrainian crisis. This is the first meeting between the two men.

Germany had remained relatively in the background in recent weeks, showing its support for the territorial integrity of Ukraine while trying to spare Russia, which must start its gas deliveries in the coming months, via the Nord Stream II gas pipeline. .

In this regard, Washington has already warned that in the event of a Russian invasion of Ukraine, this gas pipeline could not enter into service.

Germany prepares to strengthen its presence in the Baltic countries

Olaf Scholz, however, assured Sunday that Germany was ready to send additional troops to the Baltic countries. Berlin leads a NATO operation in Lithuania, where 500 German soldiers are deployed.

Asked whether the sending of reinforcements could be decided at a meeting of NATO defense ministers in mid-February, Scholz replied: “We are ready to make a decision“.

Defense Minister Christine Lambrecht previously said that Germany was ready to strengthen its presence in Lithuania.

The statements come amid growing fears that Russia is preparing to invade Ukraine, with the West accusing President Vladimir Putin of massing more than 100,000 troops on the border between the two countries.

Russia denies plans to invade the country, but has demanded of the West that Ukraine never be allowed to join NATO.