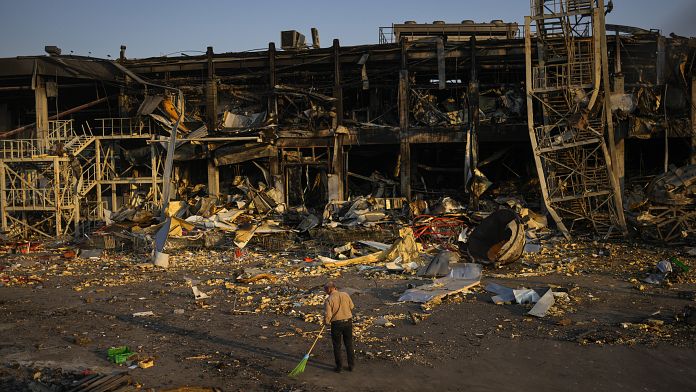 The European Union announced on the occasion of this meeting that it would provide an additional military aid of 500 million euros to Ukraine, thus increasing its financing of the Ukrainian military effort “to 2 billion euros in total“.

In any case, Kyiv relies heavily on this support. Ukrainian Foreign Minister Dmytro Kouleba said he asked G7 countries to confiscate Russian assets that will be used to rebuild his country. He also warned against the new sanctions package against Russia: “If this package is adopted without an oil embargo, I believe that President Putin will be able to celebrate because it will be the first time that the unity of the European Union will be broken because of the position of one country. , Hungary“, did he declare.

On the subject of sanctions, the 27 members of the EU have indeed still not succeeded in agreeing to gradually stop their purchases of Russian oil, Hungary having considered the exemption obtained insufficient.

The EU, an “aggressive and bellicose” actor for Moscow

For his part, the Russian Minister of Foreign Affairs, Sergei Lavrov, on a trip to Tajikistan, accused the EU of having transformed itself into an actor “aggressive and belligerent“and felt that Kyiv’s desire to integrate the EU”was not trivial.” “Ukraine demonstrates by all means its ambition to become a member of the European Union. Still, kyiv’s desire raises serious doubts. Because the EU has gone from a constructive economic platform, as it was created, to an aggressive and belligerent player which already displays its ambitions far beyond the European continent.”

Washington, for its part, has resumed direct communication with Moscow. According to the Pentagon, US Secretary of Defense LLoyd Austin met on Friday with his Russian counterpart Sergei Shoigu. This is a first since the start of the invasion: “The US Secretary urged an end to the conflict in Ukraine and stressed the importance of maintaining communication“said Pentagon spokesman John Kirby. However, according to a senior Pentagon official, “the call itself did not solve any acute problem or lead to direct changes in what Russians do or say”.

On the ground, fighting continues

On the ground, the war continues and nothing suggests an end soon. Ukraine claims to have inflicted a severe defeat on Russian troops in their attempt to cross the Donets River to control southern Donbass. According to Kyiv, in four days the Russian army lost more than 70 units of equipment and two infantry battalions with engineers.

Fighting also continues in the east between Russian forces and the Ukrainian army, notably in Mariupol, the large port city in the south-east where a thousand Ukrainian soldiers are still resisting, entrenched in the bowels of the Azovstal steelworks. “There are nearly 600 wounded on Azovstal, the Russians continue to bombard the military hospital“, testified from the factory Sviatoslav Palamar, the deputy commander of the Azov regiment, one of the Ukrainian formations there, during an online conference.

“We will resist as long as we can (…), if we hadn’t, this horde would go further“, he added. International efforts, including those of Pope Francis, have so far proved unsuccessful in rescuing the Ukrainian soldiers entrenched in this city 90% destroyed by Russian bombing.

Helsinki-based RAO Nordic Oy has not received payment for electricity supplied to Finland since May 6, the group said in a statement. “This situation is exceptional and takes place for the first time in more than 20 years,” the statement said. “We are therefore obliged to suspend the import of electricity from May 14,” explains the supplier.

“We hope that the situation will soon improve” and deliveries from Russia will resume, adds the group. The company did not say whether these settlement issues were related to European sanctions targeting the Russian economy after the invasion of Ukraine.

Finland’s intention to join NATO is in any case viewed with a very dim view by Moscow, which has already threatened a “military-technical” response.