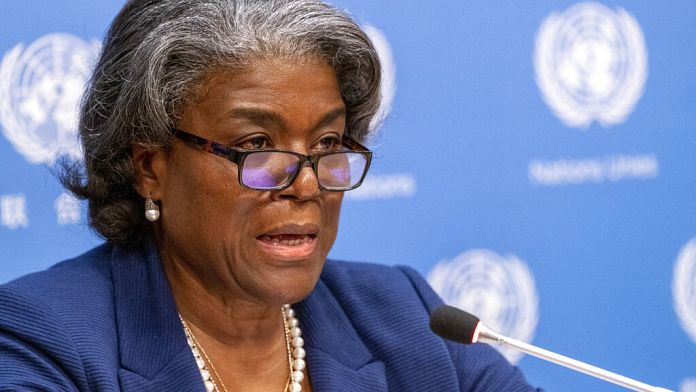 The Security Council meets Monday on the Ukrainian crisis at the request of Washington which, with its NATO allies, is stepping up its efforts to dissuade Moscow from invading Ukraine, while preparing new sanctions against Russia.

The threat of new sanctions

“More than 100,000 Russian troops are deployed on the Ukrainian border and Russia is engaging in other acts of destabilization targeting Ukraine, which constitutes a clear threat to international peace and security and the Charter of the United Nations”affirmed a few days ago the American ambassador to the UN, Linda Thomas Greenfield.

Faced with the threat of an invasion, Kiev on Sunday called on Russia to withdraw its troops massed along the border between the two countries and to continue dialogue with the West if it wishes “seriously” a de-escalation of tensions.

The United States and the United Kingdom have meanwhile brandished the threat of new sanctions against Russia. London has indicated that it wants to target Russian interests “which directly concern the Kremlin”. In Washington, two elected Democrats and Republicans said that Congress was close to an agreement on a bill providing for new economic sanctions against Russia.

Among the arsenal of sanctions mentioned, both the United Kingdom and the United States plan to target the strategic Nord Stream 2 gas pipeline between Russia and Germany, or theRussian access to dollar transactionsthe leading currency in international trade.

Faced with the prospect of these new sanctions, Moscow demanded to be treated on an equal footing by Washington. “We want good, fair, mutually respectful and equal relations with the United States, as with any other country in the world”declared on television the head of the Russian diplomacy, Sergei Lavrov.

Russia “does not want to remain in a position where (her) security is regularly violated”continued Mr. Lavrov.

“We will be ready to respond to any misinformation”

On Monday, Russia will likely try to prevent the 15-member council from holding the meeting, “but the Security Council is united. Our voices are united in asking the Russians to explain themselves”said Sunday on ABC the American ambassador to the UN.

“We will enter the room ready to listen to them, but we will not be distracted by their propaganda”she added. “And we’re going to be ready to respond to any misinformation they try to spread during this meeting.”

Russia has been accused since the end of 2021 of having massed up to 100,000 soldiers on the Ukrainian border in preparation for an attack. Moscow denies any plan in this direction, while demanding written guarantees for its security, including the rejection of Ukraine’s membership of NATO and the end of the military reinforcement of the Atlantic Alliance in the East.

This key request was rejected by the United States this week in a written response to Moscow. The Kremlin said it is still considering its reaction.

Several Western countries have announced in recent days the dispatch of new contingents to Eastern Europe.

The British Prime Minister Boris Johnson is going to propose this week to NATO a deployment of troops to respond to the rise of “Russian Hostility” towards Ukraine. An announcement appreciated by the Secretary General of NATO, Jens Stoltenbergand the Ukrainian Foreign Minister Dmytro Koulebawho both hailed the “leadership” British.

Canadian Minister of Defense Anita Anand, whose country provides military assistance to Ukraine, arrived there on Sunday for a two-day visit. She announced the movement of Canadian military troops to western Ukraine and the temporary repatriation of all non-essential employees stationed at her embassy in Kyiv.