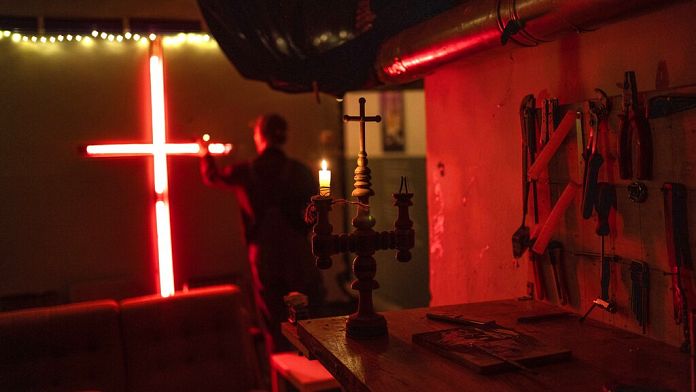 On February 24, the sirens sounded, the Russian invasion was launched. First bombardments and plumes of smoke, the unthinkable becomes reality.

Russian troops invade Ukraine from the North, East and South. In just a few hours, they seized the Chernobyl power plant.

Ukrainian President Volodymyr Zelensky orders the general mobilization of all men over 18.

In the days that followed, the West announced a series of unprecedented sanctions against Russia. Moscow is disconnected from the international financial system. Vladimir Putin puts his nuclear deterrent on high alert.

On the front, the Ukrainian resistance is fiercer than expected. Volodymyr Zelensky refuses to be evacuated.

He urges Ukrainians to defend themselves and the international community to help the country.

In Kherson, the first major city to fall into Russian hands on March 2, residents take to the streets and demonstrate against the new occupier.

Millions of people are fleeing the combat zones, many of them women and children. Some leave the country, heading for neighboring states and in particular Poland.

On the ground, the invasion is bogged down and the frustration of the Russian army is visible even in the air. Satellite images show the blockage of the gigantic military convoy on the highway leading to Kyiv.

Civilians are not spared. As in Syria or Chechnya, Moscow conducts massive bombardments and conducts a ruthless siege on the city of Mariupol on the shores of the Sea of ​​Azov.

A maternity ward and a children’s hospital are destroyed. And a theater transformed into a shelter is bombarded.

Most attempts to open humanitarian corridors fail in Mariupol, which begins to bury its victims in mass graves.

Having become a pariah on the international scene, the Russian president takes a walk in the largest stadium in Russia in Moscow.

It celebrates the 8th anniversary of the annexation of Crimea.

After a month of war, the destruction is considerable.

There are thousands of dead on both sides, including many Ukrainian civilians. The number of refugees is close to 4 million, the number of displaced persons 3.5 million. Today, the dialogue of the deaf continues to establish a ceasefire.