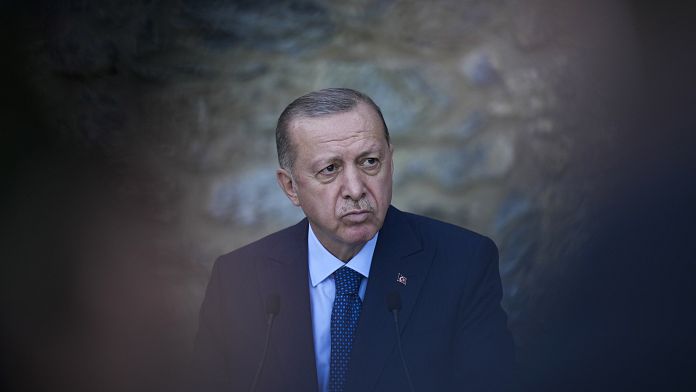 Turkish President Recep Tayyip Erdogan said on Saturday that ambassadors from ten countries including France, Germany and the US who have appealed for the release of opposition leader Osman Kavala will be declared “persona non grata”.

“I have ordered our Foreign Minister to settle as soon as possible the declaration of these 10 ambassadors as persona non grata“, affirmed the Head of State during a trip to central Turkey, without however giving a precise date.

These ambassadors “must know and understand Turkey“, claimed Mr Erdogan accusing them”indecency“. “They will have to leave the country”if they don’t know him anymore“, he added.

In a statement issued Monday evening, Canada, France, Finland, Denmark, Germany, the Netherlands, New Zealand, Norway, Sweden and the United States had called for a “fair and speedy resolution of the case” Osman Kavala, a Turkish businessman and patron who became a bête noire of the regime, imprisoned for four years without trial.

Accused of seeking to “overthrow the government”

The Turkish head of state had threatened Thursday to expel these ambassadors, without however taking concrete steps in this direction. Turkey had summoned the ambassadors of these ten countries on Tuesday, judging “unacceptable“their call for the release of Osman Kavala.

This 64-year-old opponent, a major figure in civil society, has been accused since 2013 by President Erdogan’s regime of seeking to destabilize Turkey. In particular, he is in the firing line for supporting the anti-government protests known as the Gezi Movement in 2013. Then he was accused of seeking to “overthrow the government” during the 2016 coup attempt.

In December 2019, the European Court of Human Rights (ECHR) ordered his “immediate release” – to no avail. Osman Kavala will remain in prison at least until November 26, an Istanbul court ruled in early October, despite European threats of sanctions against Ankara.

The Council of Europe has recently threatened Turkey with sanctions, which may be adopted at its next session (30 November to 2 December) if the opponent is not released by then.