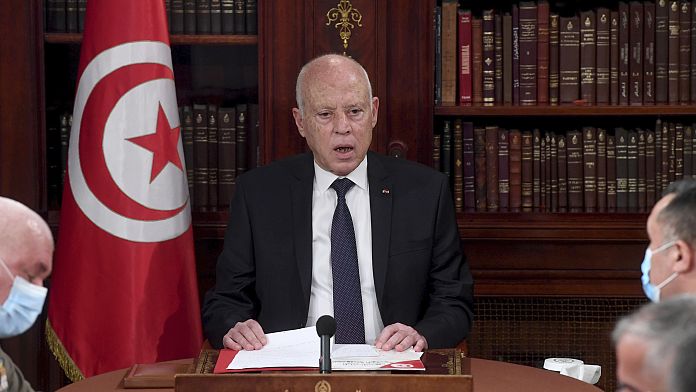 Tunisian President Kais Saied announced on Wednesday the dissolution of Parliament eight months after suspending it to assume full powers in July 2021, shaking the democratic experience in the country, the cradle of the Arab Spring.

Kaïs Saied made this announcement during a meeting of the “National Security Council” which he chaired, a few hours after deputies braved the suspension of Parliament by organizing a virtual session, during which they voted to cancel the exceptional measures since decided by the president.

After months of political blockage, Kaïs Saïed, elected at the end of 2019, assumed full powers on July 25 by dismissing the Prime Minister and suspending the Parliament dominated by the party of Islamist inspiration Ennahdha, his pet peeve.

On September 22, the Head of State formalized his full powers with “exceptional measures“which extend the suspension of Parliament. They also allow it to legislate by decree, to preside over the Council of Ministers and to amend laws.

One hundred and twenty Tunisian deputies braved the suspension of Parliament on Wednesday March 30 by organizing a virtual session during which they voted to cancel these exceptional measures.

At the call of the Office of the Assembly of People’s Representatives, a body which brings together the Presidency of Parliament and representatives of the parties sitting there, 120 deputies (out of a total of 217) participated in this online plenary, chaired by Tarek Fertiti, Deputy Speaker of Parliament, an independent.

One hundred and sixteen deputies voted in favor of a bill aimed at reversing the exceptional measures taken by Kaïs Saied, which they believe are blocking the democratic process and establish one-man rule in the country that was the cradle of the Arab Spring.

The deputies, including elected members of Ennahdha and independents, also called for the organization of early legislative and presidential elections to get out of the political and socio-economic crisis.

In his speech announcing the dissolution of parliament, the Tunisian president described the meeting of deputies as “failed coup attempt“. He accused the participants of “conspire against state security“and asked the Minister to take legal action against them.”Our military and civilian security forces will meet the law against any use of violence“, he warned.

After suspending Parliament and dismissing the government, Kaïs Saied dissolved the Superior Council of the Judiciary (CSM) in February, a measure described as a new authoritarian drift by his detractors and which has raised concerns for the independence of the judiciary.

Kais Saied unveiled a roadmap to get the country out of the crisis with elections scheduled for July as well as a referendum on constitutional amendments, but an online popular consultation he launched to collect proposals was largely shunned by Tunisians.

In addition to the political stalemate, Tunisia to get out of a deep socio-economic crisis and discusses with the International Monetary Fund to obtain a new loan.

Magnitude 6.3 earthquake near the coast of Taiwan