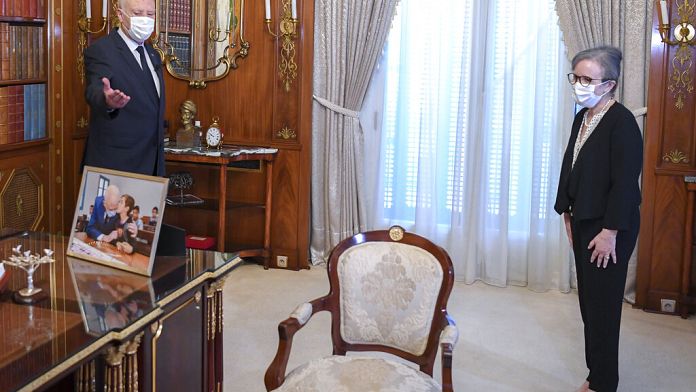 Tunisian President Kais Saied has commissioned for the first time a woman, Najla Bouden, to form a government in Tunisia, two months after the dismissal of the previous cabinet, the presidency announced Wednesday.

Ms Bouden was “tasked with forming a government as soon as possible”, the presidency said in a statement.

Born in 1958 and a scientist by training, Ms. Bouden, who is almost the same age as President Kais Saied and hails from the city of Kairouan, is unknown to the general public.

This is the first time that a woman has taken the leadership of the government in Tunisia, although the powers granted to this role have been significantly diminished by the “exceptional measures“adopted by Mr. Saied on 22 September, suspending the implementation of key chapters of the Constitution.

The Presidency released a video of Mr. Saied receiving Ms. Bouden in his office and instructing her to form a new government to present it to him “in the next few hours or days”.

Mr. Saied repeatedly insisted on the character”historic“the appointment of a woman for the first time to lead the government in Tunisia. “It is an honor for Tunisia and a tribute to the Tunisian woman.“

The main mission of the future government will be “to put an end to the corruption and chaos that has spread in many state institutions“.

The presidential decree of 22 September came to formalize the coup of 25 July of President Kais Saied by which he assumed full powers, after dismissing the Prime minister, freezing parliament and having taken over the judiciary.

Now, on the basis of “exceptional measures“taken time to conduct a series of”political reforms“, the head of state, holder of executive power, himself presides over the council of ministers.

The measures of 22 September also provide for the continuation of the freezing of Parliament and for the President to legislate by decrees. Prior to her surprise appointment, Ms. Bouden was executive director of a higher education reform project. Previously, this doctor of geology had been mission manager, then director general at the Ministry of Higher Education.