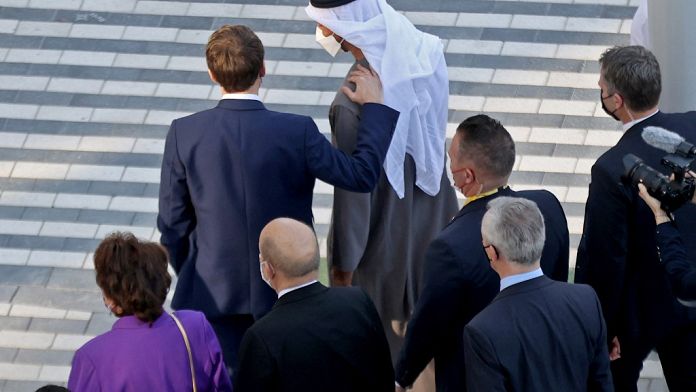 The United Arab Emirates signed on Friday in Dubai, in the presence of the French president, an agreement to acquire 80 Rafale fighter jets, a record order for the French fighter plane which entered service in 2004.

In total this order, with the purchase of 12 Caracal helicopters and associated elements, represents an amount of more than 17 billion euros, including 14 for the Rafale alone, according to the Elysee.

This order comes ten years after fruitless negotiations supported by former French President Nicolas Sarkozy. Since then, the Rafale has made an international breakthrough despite competition from American and European aircraft.

For Emmanuel Macron, this order is “very good for France” because she “creates jobs“in the country and allows”guarantee the sustainability of the Rafale production chain until the end of 2031“according to the Ministry of the Armed Forces.

Lebanon’s dossier, in the background

In addition to the signing of juicy contracts, the challenge of Emmanuel Macron’s tour in the Gulf countries is to deal with issues of regional importance, in particular that of Lebanon, whose political life is dominated by the pro-Iranian Hezbollah.

Already mired in a serious social and humanitarian crisis aggravated by the explosion of the port of Beirut on August 4, 2020, the country is currently going through a diplomatic crisis with Saudi Arabia. In early November Riyadh cut ties with Beirut after criticism from a Lebanese minister on the war in Yemen, George Kordahi.

While the French president is due to visit Saudi Arabia on Saturday, the Lebanese information minister resigned on Friday, indicating that his withdrawal could help “to initiate a dialogue with Saudi officials concerning Lebanon and the future of bilateral relations“.

Macron assumes to dialogue with MBS

Emmanuel Macron’s wish to involve Saudi Arabia in relaunching Lebanon was not without criticism. The French president is due to meet on Saturday with the very controversial Mohammed ben Salman, suspected of being behind the assassination of journalist Jamal Khashoggi in 2018, at his country’s consulate in Istanbul.

But the French president has defended his decision to be one of the first Western leaders to meet the Riyadh strongman since the sordid affair.

“Who can think for a single second that we are helping Lebanon, that we are preserving peace and stability in the Middle East if we say: “we no longer talk to Saudi Arabia, the most populous and the most important country? Gulf? “”, He asked.

“This does not mean that I endorse, that I forget, that we are not demanding partners “ but it is “just to act for our country and for the interest of the region“he estimated.

Saudi Arabia is Lebanon’s third-largest export market, accounting for 6% of the country’s exports in 2020, worth around $ 217 million, according to the chamber of commerce.

The Saudi foreign minister last month said that Hezbollah’s dominance in Lebanon, and not just Minister George Kordahi’s comments, had prompted the kingdom to sever ties.