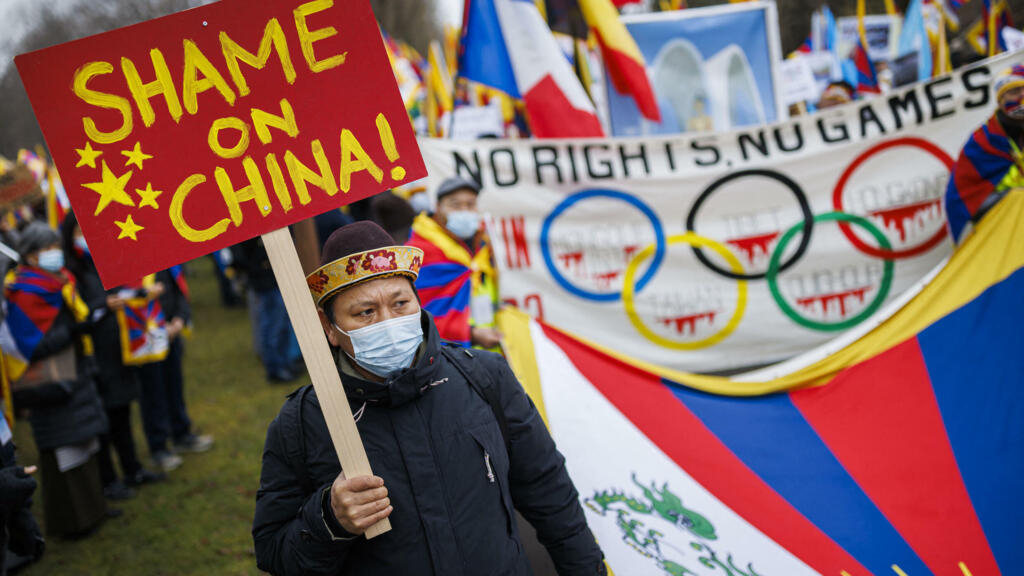 On the eve of the opening ceremony of the Winter Games in Beijing, hundreds of Tibetans protested Thursday outside the International Olympic Committee in Lausanne, Switzerland. They called for an end to human rights violations in Tibet.

Half a thousand Tibetans demonstrated Thursday, February 3, in front of the headquarters of the International Olympic Committee (IOC) in Lausanne (Switzerland), to protest against the organization of Winter Olympics in Beijing whose opening ceremony takes place on Friday.

Coming from all over Europe, the demonstrators, led by an activist wearing skis and dragging the Chinese flag behind him, covered the three kilometers separating the IOC headquarters from the Olympic Museum.

Several carried Tibetan flags and masks in its colors, marching under banners calling for a boycott of the Games, denouncing the “Games of Shame” and proclaiming “Stop human rights violations in Tibet”.

A poster held up in the procession represented a skier standing in front of a tank whose tracks were replaced by the Olympic rings, a visual allusion to the famous photograph of a demonstrator blocking a column of armored vehicles alone during the repression of the democratic movement in the square. Tiananmen in 1989 in Beijing. Another claimed: “That Beijing 2022 does not become Berlin 1936”.

“China has destroyed my country”

Tibetan artist Loten Namling, who has lived in Switzerland for 32 years, led the protest on skis painted with the word “freedom”. “The reason I’m waving the Chinese flag is because China destroyed my country, China destroyed my culture. Let them realize how hard it is for us,” he said. “We should never give the organization of the Olympics to mass murderers and dictators. It’s time to say stop.”

Tibetan opponents denounce Beijing’s stranglehold on the Himalayan region which was de facto attached to China in 1951 and accuse the Chinese central government of carrying out religious and cultural repression.

Several of them climbed to the roof overlooking the entrance to the IOC headquarters, where they unfurled a black banner reading “No to Beijing 2022”.

At the origin of this gathering, Karma Choekyi, president of the community of Tibetans in Switzerland, criticized the Olympic movement and its financial partners for having turned a blind eye to the situation of civil liberties in China.

“The Chinese communist regime is strengthened and believes that these Games legitimize its right to suppress human rights (…)”, she added. “We condemn the IOC and the sponsors for allowing this to happen.”

In Los Angeles too

A demonstration also mobilized around fifty people in Los Angeles in front of the Chinese consulate.

Kevin Young, a member of “Friends of Tibet” from the Californian city of Santa Barbara, said the Winter Olympics in Beijing were meant to make people forget the abuses of the Chinese government.

“I don’t want human rights violations, torture in Tibet, in Hong Kong, against Uyghurs, to be minimized because of these Olympics,” he told AFP. “We do not want to remain silent in the face of the oppression of the” communist regime, added the demonstrator.

Basketball – NBA: The confidence of the Lakers coach on the injury of LeBron James!