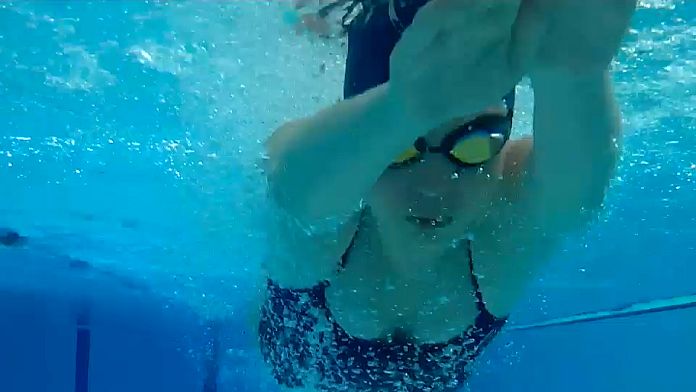 Swimming to forget the war. This is what remains to be done for Karolina, a 15-year-old swimming enthusiast who fled Ukraine with her family to escape Russian bombs.

With some members of her family, she was welcomed by the SOS Solidarités group association which accompanies refugees arriving from Ukraine in Roissy-en-France, near Paris.

A life and dreams disrupted by war

Fleeing the Russian bombs in Lviv was a terrible shock for this semi-professional swimmer who was at the start of her sports career in her native country.

“I joined a sports-study section in college under the guidance of my coach. I started participating in regional and national competitions and won prizes. In Ukraine I was in a club and I had very good courses that allowed me to progress”, said the young teenager.

At Roissy where she was welcomed with her family, Karolina continues the lengths. It’s a moment of respite, in a daily life bathed in nostalgia and images of war. The teenager is now sharing her videos with her friends back in Ukraine.

Arrived in France after a long journey to cross the Polish border, Karolina is hosted with her family by the association SOS Groupe Solidarités, which accompanies refugees from Ukraine.

More than 300 are currently housed with her in a hotel in Roissy.

Natalia, Karolina’s mother, was thinking of leaving Lviv for only a few weeks… It has now been two months since she fled with her children, and she has not seen her husband.

_”My native country is at war, I miss Ukraine a lot. My relatives are still there: my husband, my mother, my sister, the rest of my relatives and also many friends…_Of course, I am in contact with them, we communicate and ask them how they are. The news isn’t always comforting, they’re mostly living in fear right now.” she explains.

The future prospects for his family are still unclear. Karolina, who is now educated in France, hopes to be able to resume swimming at a high level, and why not one day, defend the colors of her country at the Olympic Games.

Social First of May and for Ukraine: from Istanbul to Paris, clashes punctuated the demonstrations

Welcome to the “Maison de l’Ukraine” in Lyon, a friendly and supportive place for the diaspora