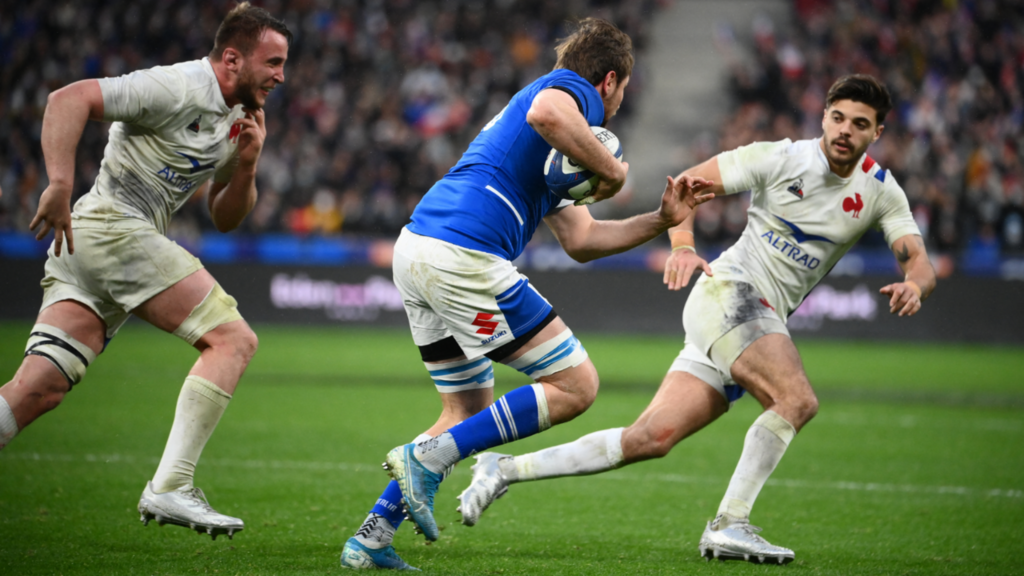 For their entry into the running in the 2022 Six Nations Tournament, the Blues beat the Italians on Sunday (37-10), even winning an offensive bonus point. They take first place in the standings.

Contract completed. The XV of France, winded or even laborious, got out of the Italian trap (37-10), Sunday, on behalf of the first day of the Six Nations Tournament 2022 and takes first place in the ranking.

The Blues, deprived of their coach Fabien Galthié who tested positive for Covid-19, scored five tries, synonymous with an offensive bonus point, Anthony Jelonch (26and), Gabin Villiere (40and49and80and+1) and Damian Penaud (69and).

>> To read also: “Six Nations Tournament: ‘The Blues are counting on an exceptional generation'”

Enough to get rid of a catchy Italian team, which has long posed problems for Antoine Dupont’s teammates.

The Blues therefore settle in first place in the standings, ahead of Ireland, in demonstration on Saturday in front of Wales (29-7), and ahead of Scotland, which suffocated England (20-17).

They also chain a twelfth victory in a row, including nine in the Tournament, against the Transalpins, who have not returned victorious from a trip to France since 1997 and a 40-32 inflicted on the Blues, in Grenoble.

For a side that have lost 33 consecutive matches in the Tournament and haven’t won away from home since June 2018 and a 25-22 win against Japan, Italy have fought hard.

The incessant rain of the first forty minutes does not explain everything. No more than the absence of Galthié, forced to “telework”, according to the good word of the manager of the Blues, Raphaël Ibanez.

With five Toulousains in the starting XV, including four “covids” at the end of January (Ntamack, Dupont, Jelonch, Baille) returned to Blue at the start of the week, this XV of France clearly lacked rhythm.

Since December 11, Antoine Dupont had played only 70 minutes, unconvincing, last week against Racing 92 before returning to the Tournament.

And it felt: the best player in the world 2021 is having a complicated start to the year and his drop in level has clearly had an impact on the game of the Blues, as clumsy (10 turnovers conceded) as undisciplined (14 penalties against them).

Fortunately for them, Anthony Jelonch, the courageous captain of the Australian tour, led the way with a mischievous interception (26and), to register his first try in Blue.

And if the striker Melvyn Jaminet, usually so consistent, had a few failures (two failed conversions), Gabin Villière, he was able to take his chance with a hat-trick, his fourth, fifth and sixth international tries.

The Italians fell again. But they also showed, with a rejuvenated team (average age of 25 at kick-off), that they could compete with the best. At least for 50 minutes.

Fly-half Paolo Garbisi (21) made his opponents dizzy while center Tommaso Menoncello became the youngest try scorer in Tournament history at 19 years and 170 days.

These “Azzurri” have a future. The Blues, themselves, self-appointed candidates for the final victory, remain in the race for a first Grand Slam since 2010.

But they will have to show another face next Saturday against a formidable XV of Clover, who arrives at the Stade de France full of confidence.

Brazilians from Palmeiras win for the second year in a row