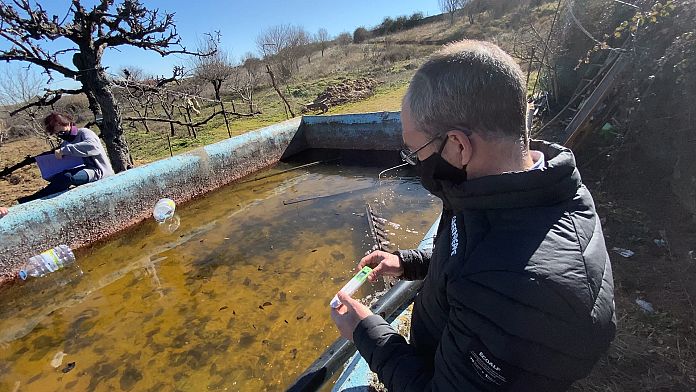 What is the quality of rivers and tap water in Europe? About half of Europe’s rivers, lakes and coastal waters contain hazardous substances. In Spain, in some regions, human activity threatens populations and ecosystems.

The province of Zamora and its tap water contaminated with nitrates

Zamora is one of the Spanish provinces where tap water is contaminated. A native of the region, Emilia Román traveled throughout the province last year to take regular samples and measure the level of nitrates in drinking water and groundwater. I accompany her to the village of Santovenia where she comes to check the composition of the tap water at a friend’s.

Coordinator for the province of the association of inhabitants “Pueblos Vivos”, Emilia Román is part of a network of inhabitants created by Greenpeace to monitor water quality in rural areas of Spain. She received a nitrate tester to do her readings in the area.

That day, the device is formal: the tap water at the home of his friend Sonsoles exceeds the limit established by the WHO of 50 mg of nitrates per liter. Both women are concerned because high nitrate levels can increase the risk of miscarriages, birth defects, and even death. cancer. They are angry because they know who is at fault.

“The origin of water pollution is obvious,” Sonsoles points out. “These are the ones who dump waste from intensive livestock farming on the fields,” she says before adding: “Nitrates from slurry seep into the soil and pollute groundwater.”

Nitrate water pollution has become a national scandal. In the countryside, many are those who denounce the inaction of the authorities in this matter and demonstrate almost every week against the damage caused by intensive pig farming.

“The problem with mega-farms is that they invade us: there are 600,000 pigs in Zamora, it’s unbearable, it’s an unsustainable industry,” denounces Luís de Nicolás Latorre, spokesperson for Tierra de Alba, an association of inhabitants.

Castile and León is one of the 20 European regions with most pigs. Spain is also Europe’s largest pork exporter. In some areas, pigs outnumber people.

No farmer agreed to talk to us. I then take the road with Greenpeace to see how the waste of this industry is eliminated. We stop next to a farm.

“The slurry produced by these animals is collected in these tanks and then spread on nearby fields,” shows me Luís Ferreirim, agriculture campaign manager for Greenpeace Spain. “When the soil can no longer absorb it, the manure infiltrates the water tables and contaminates them,” he explains.

The scale of the spreading questioned

The practice is common and legal in Spain. It is its magnitude that is the problem. “The legislation is very permissive, authorizations are granted without having a global vision of what is happening,” denounces Luis Ferreirim.

In several of the main pig farming regions, nitrate levels in groundwater were found to be up to four times higher than the permitted level of 50 mg per litre. Although these extreme cases are rare, concentrations exceeding the norm are widespread. According to official data, 23% of groundwater in Spain is polluted with nitrates. This is also the case for 22% of surface water.

According to Greenpeace, these figures correspond only to the tip of the iceberg. The NGO invited residents to participate in water monitoring to increase the number and frequency of measurements. The result is worrying results. “In 2000, about sixty municipalities in the region of Castile and León were affected by nitrate pollution. Currently, there are more than 700,” says Luis Ferreirim. “It does not only affect this region: in Catalonia, 40% of groundwater is totally polluted with nitrates,” he adds.

Brussels has taken Spain to the Court of Justice of the European Union for its insufficient implementation of the nitrate directive.). Intensive agriculture and cattle ranching have been implicated.

The environmental disaster of the Minor Sea

Almost every morning, Los Nietos beach on the Minor Sea, one of the largest salt lagoons in Europe, is raked to prevent algae from accumulating and rotting on the shore. When the temperatures are higher in summer, this task is almost impossible. Algae proliferate uncontrollably by being fed by nitrates from agricultural fertilizers.

This process called eutrophication Is at the origin of ecological disasters. Tons of fish have been found dead on the shores in 2019 and 2021. This has triggered a wave of indignation in the country.

“Intensive agriculture is present all around the Minor Sea, nutrients flow into the lagoon: these fertilizers destabilize the ecosystem and lead to eutrophication which turns the sea into “green soup” in summer and can kill fish,” says Pedro Luengo, biologist from the Ecologistas en Acción group. “No solution has yet been found because we have to look for it inland,” he insists.

Not far away, in Campo de Cartagena, 60,000 hectares of land are intensively cultivated around the lagoon. According to Ramón Pagán, president of the Pacto por el Mar Menor group of inhabitants, irrigation is the main cause of the degradation of the Minor Sea. “This type of intensive agriculture has eliminated terraced fields,” he says. “This area has become a huge inclined plane towards the Minor Sea and the intense rains are causing severe erosion and carrying soil and fertilizers towards the lagoon,” he laments.

President of the Association of Irrigating Farmers of Campo de Cartagena, Manuel Martínez Madrid points out to me that this sector of activity is not the only culprit. He assures that most farmers have adopted modern and sustainable production methods. “Well-managed intensive agriculture is not a problem,” he assures. “We use half the water and much less fertilizer than the Food and Agriculture Organization, FAO, recommends,” he insists.

However, official data shows that tons of nitrates flow into the lagoon every day. Associations and scientists have been calling on local and national authorities for years to save the lagoon. They deplore that their appeals are systematically ignored.

The right-lead local administration gives me a long list of measures it is implementing, but blames part of the blame on Madrid’s ruling left-wing coalition.

The reality is that this lagoon is dying. Specialists say that it is still possible to save it, but the more time passes, the more the damage will be irreversible.

Reunion in fear of Cyclone Batsirai