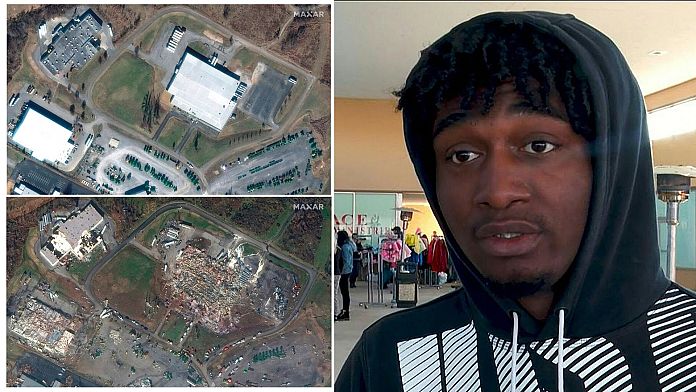 Jemaryon Hart is a survivor of the tornadoes that hit the central United States, killing nearly 80 people. The 21-year-old African-American was working in the candle factory in the town of Mayfield when the tornado hit. He tells about his ordeal.

Friday night, he says, “we heard the siren (alarm) and we rushed to the security areas but when it happened, suddenly, there was nothing to do“.

The tornado hit the building, whose roof collapsed, trapping the employees.

“It was terrifying, I was crushed by walls, metal blocks, wooden walls“, he said.”The longer it lasted, the more the building sagged. At first I could move a bit, after that it was no longer possible, I was compressed.“

“I tried to control my breathing but for others it was impossible and they were panicking. We couldn’t see anything. Some passed out, others died.“

The young man still managed to get his phone out of his pocket to call his girlfriend, who is pregnant, and then his mother.

“It gave me hope, confidence to resist and survive, and wait for help“, which released it after about seven hours of anguished waiting, at 3:40 in the morning, he explains.

The first rescuers, who arrived an hour after the tornado had passed, took a long time to clear the debris. “The slightest bad gesture would have crushed us under the rubble“, he explains.

Once cleared, he was brought to safety by the firefighters. He no longer felt his legs.

“That’s when I saw that the factory, the parking lot, the cars, everything was gone“, he recalls.

Beyond the physical injuries and leg pain, he remains psychologically bruised.

A young colleague he knew is dead and he keeps reliving his ordeal each time the factory is mentioned.

“The images are spinning in your head. It’s hard to manage“, he confides.

He denounces the lack of security measures on the part of the management, which has decided to continue production despite warnings from the authorities.

“Some are angry because we had to work that evening and there was no alert“, he explains. The company could be sued:”If we don’t do what it takes to make employee safety the top priority, that’s what they deserve. “

Now, he concludes, “I’m just happy to be alive“.