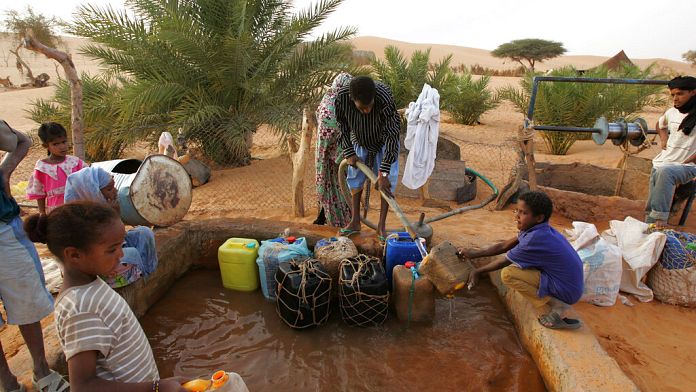 In the Sahel, the desert is gaining ground. Houses and farmland are found buried under the dunes. To slow the advance of the sand, eleven African countries including Mauritania have embarked on a pharaonic project: the great green wall. The idea: to plant plants in mass over nearly 8,000 km in length between Senegal in the west and Djibouti in the east.

Problem, the rise in temperatures and the scarcity of rains linked to climate change have caused the death of millions of trees in Mauritania.

To ensure the survival of the local flora, wells and irrigation systems powered by solar panels were installed. Salem, a resident of Chinguetti, emphasizes the importance of these facilities.

“Since 2018, rain has become very rare, and people have been using pumps in the palm groves since. __It is thanks to this method that we were able to protect them. People need help in times of drought. With these solar pumps, we were able to make water available to everyone. People really need the rain to fall, but maybe she wasn’t ordered to fall“, he explains.

The project also has a strong social dimension affirms the Mauritanian Minister of the Environment and Sustainable Development, Marieme Bekaye: “What must be understood about the Great Green Wall program is that it is an integrated rural development program that combines both the objectives of environmental preservation, and the objectives of setting up rural development poles, in order to be able to improve the living conditions of rural populations and in particular of the most vulnerable populations. “

The Mauritanian government also offers courses for populations to learn how to grow plants and food while adapting to the constraints of climate change.

The fact remains that fifteen years after its launch, only 4% of the territory concerned by the program has been restored and 42 billion dollars are still needed to complete the ambitious project.