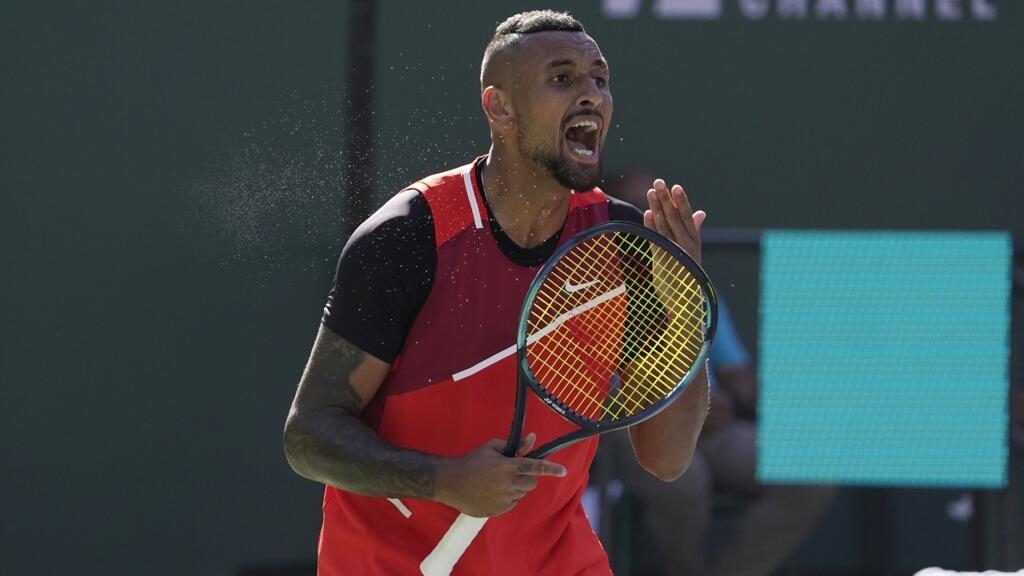 In the quarter-finals of the Indian Wells Masters 1000 on Thursday, Nick Kyrgios shook Rafael Nadal. And he once again displayed his tempestuous character. On the circuit, the Australian tennis player is distinguished by his fits of anger. Differences that cost him dearly but that also say a lot about his personality.

Before the start of the Indian Wells tournament, the first Masters 1000 of the year, it had been a month and a half since we had seen Nick Kyrgios. His last appearance was in the second round of the Australian Open in January. In front of his audience, the Australian had ignited the Rod Laver Arena before losing to the Russian Daniil Medvedev, future finalist and future world number one.

In California, Nick Kyrgios received an invitation (wild card). At the gates of the top 10 between 2016 and 2018, the Canberra native gradually fell in the rankings, until he left the top 100 at the start of 2022. But his current 132nd rank reflects his psychological flaws more than his real potential.

Sebastian Baez (60th in the world), Federico Delbonis (34th in the world) and Casper Ruud (8th in the world) can attest to this. All three have been taken out one after the other by Nick Kyrgios since the start of the tournament, each time in two sets. And Rafael Nadalhis opponent Thursday in the quarter-finals, had to fight hard not to suffer the same fate.

Strokes of genius and strokes of blood

In front of an audience committed to his cause, the Spaniard suffered enormously to extricate himself from the trap set by the Australian. After winning the first round, Rafael Nadal lost the second. And after almost three colorful hours, the “Bull of Manacor” was able to exult.

Defeated (7-6 [0], 5-7, 6-4), Nick Kyrgios received congratulations from his executioner. “Nick is one of the most talented players on the circuit. When he plays with motivation and passion, he can beat anyone. I wish him the best”, applauded “Rafa”. A few sympathetic words from the world number 4 to the attention of the Australian volcano erupting all afternoon. On Thursday, Nick Kyrgios did Nick Kyrgios.

In the stands, facing the darling Nadal, the 26-year-old player did not only have friends. A few drunken spectators saw fit to shout as he served. A disrespectful and unfortunately effective attitude to get Nick Kyrgios out of his hinges several times. On the first set point, he yelled at a spectator “Shut your p… of mouth”. Result: the referee sanctioned Kyrgios with a penalty point which offered the first run to Nadal.

Later, when he had returned to the match with a few sumptuous shots, the outsider got angry with a spectator sitting behind him who was a little too talkative for his taste: “Are you playing? Are you good at tennis? So there you go, why are you talking? He then illustrated his point by taking actor Ben Stiller to witness, right next door: “Do I tell him how to act (at the cinema)? No!” Atmosphere… The American actor, who came to support Rafael Nadal, did not remain insensitive to the Australian’s passion.

“We are only humans”

Before laying down his arms, Nick Kyrgios had also turned on the referee: “It’s your job to control the public!”. And a few seconds after his defeat, he spent his nerves by smashing (again) a racket on the ground. It bounced very far and nearly hit a ball boy. The latter had to swerve to avoid the projectile.

Already suspended for several weeks in his career for his too vehement anger, the Australian saw red in the face of the press when he was questioned about this incident. “What do you want me to tell you? Was it my intention? No. (…) Is that a question you’re going to ask me after a three-hour battle against Nadal? That’s why you’re coming here?” he asked a reporter. Previously, he had inquired about the health of the ball boy and had been reassured. He has since found him on Instagram, where he says he made “a new friend”.

In a press conference, Nick Kyrgios expressed all his bitterness: “It hurts because I know that we will not talk about the matches I played before that. It’s the whole story of my career. I played three p… good matches. I beat a guy who won almost 60 matches last year (Casper Ruud, editor’s note) and nobody remembers that. We’re only going to remember the match where Kyrgios lost to Rafa in Indian Wells or the match where he threw a racket. People like you (he points at the journalists) ruin the sport.” “It’s unfair, but at the same time, that’s just the kind of personality I am for the sport,” he continued.

Victim of depression in 2019, in the grip of suicidal thoughts, Nick Kyrgios again scolded the spectators who attack sportsmen and women. He relied on what happened to Naomi Osaka on March 12, already in Indian Wells. The Japanese, who reported significant mental health issues last year, was singled out by a spectator and burst into tears during and after her lost match. “It affects us, we are only humans,” said the Australian, before scratching “social networks” on which “people think they are relevant when not”.

Atypical character, Nick Kyrgios plays on both counts. A fragile provocateur, capable of committing to humanitarian causes while openly criticizing other players in terms that flirt with insolence, the man with six titles (three ATP 500s, three ATP 250s) knows how to take advantage of his character . In Indian Wells, a Netflix team followed him as part of a documentary. And to a spectator surprised to see him thus accompanied, he launched: “they wanted a guy who was a bit boring, neutral, without personality”, reports the daily L’Équipe.

He may never reach the popularity rating of a Rafael Nadal or a Roger Federer. But Nick Kyrgios, with his very own style, carries messages and fights in current tennis. In the landscape of the little yellow ball, the tennis player does not leave anyone indifferent.