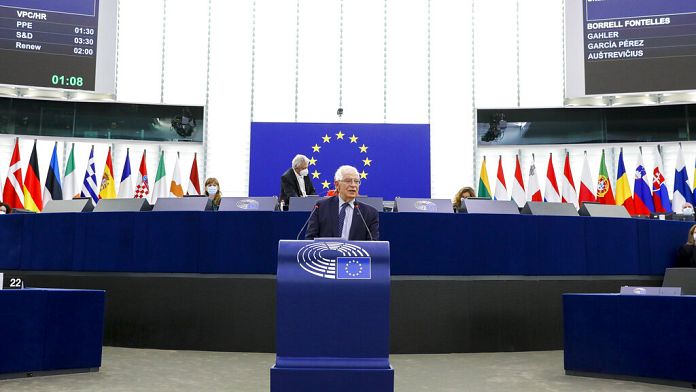 Total surprise within the European Union”s after the announcement of the security pact between the United States, Australia and the United Kingdom for the Indo-Pacific region.

Reaction this Thursday by the head of European Diplomacy, Josep Borrell : “A deal of this nature was not cooked the day before yesterday ; it takes some time. And despite that, no, we weren’t consulted. This again obliges us, this is a good opportunity to recall this, to reflect on the need to raise the question of the strategic autonomy of the European Union. It is a new proof of the need to exist by ourselves”.

At the other end of the diplomatic spectrum, China has reacted too. She sees with a bad eye the arrival of this alliance of military trucks.

Zhao Lijian, spokesman for the Chinese Ministry of Foreign Affairs : “The cooperation of the United States, the United Kingdom and Australia in the area of nuclear submarines seriously undermines regional peace and stability, intensifies the arms race and undermines international efforts to promote the non-proliferation of nuclear weapons. This is a highly irresponsible act”.

It is precisely in the face of the rapid rise of the Chinese navy in the Pacific that Australia decided to abandon conventional French submarines and turn to Anglo-American nuclear submersibles.

Tiergarten murder: a Russian sentenced to life in Berlin, the Kremlin implicated

Who was David Amess, the stabbed British MP