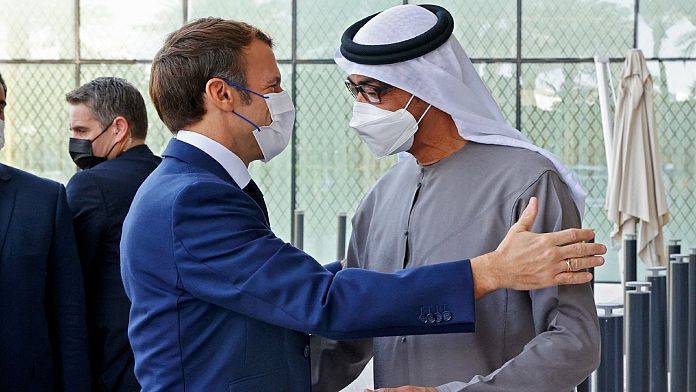 French President Emmanuel Macron is making a short visit to Dubai this Friday, the first stop on a tour of the Gulf which will then take him to Qatar and Saudi Arabia.

In addition to the Rafale, the Emirates have also signed an agreement for the purchase of 12 Caracal helicopters. “This is a major achievement of the strategic partnership between the two countries”, welcomed the French presidency in a press release.

The strong man of the Emirates, the crown prince of Abu Dhabi Mohammed ben Zayed Al-Nahyane, known as MBZ, had welcomed at the end of the morning the head of the French state to the pavilion of honor of theWorld Exhibition which is held in Dubai until the end of March.

After a tête-à-tête, the two leaders witnessed the signing of several contracts and economic agreements.

The most important contract therefore relates to the order of 80 Rafale fighter jets by the Emirates, which would eventually replace the 60 Mirage 2000 acquired at the end of the 1990s.

The Emirates are currently the fifth most important customer of the French defense industry over the decade 2011-2020, with 4.7 billion euros in orders, according to the report to Parliament on arms exports from the France.

In recent years, Paris has been criticized because some of these weapons had been used in the conflict in Yemen, where Saudi Arabia and its allies are suspected of war crimes by NGOs like Amnesty International.

By acquiring Rafale aircraft, built by Dassault Aviation, the Emirates would follow suit in particular in Qatar, which bought 36 aircraft, and in Egypt (24 aircraft purchased in 2015 and 30 in 2021).

In Dubai, Emmanuel Macron is accompanied by a large delegation of ministers, including Jean-Yves Le Drian (Foreign Affairs), Bruno Le Maire (Economy) and Florence Parly (Armies), as well as business leaders, such as Airbus, Thales, Air Liquide or EDF.

The powerful Emirati sovereign fund Mubadala is expected to announce that it is significantly increasing its investment envelope in French companies.

France wants to be a “reliable partner”

Arrived the day after the celebrations of the 50th anniversary of the creation of the Emirates, on December 2, 1971, Emmanuel Macron will visit the Emirati and French pavilions of Expo 2020, the first universal exhibition in history to be organized in the Middle East. It opened in October a year late due to the Covid crisis.

During this tour which takes him to Qatar at the end of the day and then to Saudi Arabia on Saturday, Emmanuel Macron intends to discuss “the fight against terrorism, radical Islamism and their financing” because “cooperating with these states, in particular against Daesh, is essential to guarantee the security of the French and Europeans“, according to the Elysee.

On major regional issues – Lebanon, Libya, Iranian nuclear power, Iraq – the Head of State wants France to play the role of a “_balancing power” and of a “reliable and essential partner who dialogues with all relevant actors“.

He is expected to plead the cause of Lebanon as the economic crisis he is undergoing is worsened by the sanctions taken by several Gulf states, including Saudi Arabia, which has stopped its imports from Beirut.

In Jeddah on Friday morning, Emmanuel Macron will be one of the first Western leaders to meet with Saudi Crown Prince Mohammed bin Salman (MBS) since the 2018 assassination of Saudi journalist Jamal Khashoggi at his country’s consulate in Istanbul, which has severely tarnished the image of the king’s son.

“As he does everywhere in his travels, he (the president) discusses the issue of human rights with his interlocutors when necessary.“, indicated the presidency in response to criticism from NGOs on the relevance of this meeting.

She says the meeting is not intended to “put back in the saddle “ MBS, but that “we cannot imagine having an ambitious policy” in the Middle-East “without having a demanding dialogue“with his country, a member of the G20 and the region’s main economy.

The NGO Human Rights Watch said in a statement Friday that “arms sales and the maintenance of dubious military partnerships in the name of counterterrorism and to the detriment of human rights would remain as a stain on Emmanuel Macron’s diplomatic record“.