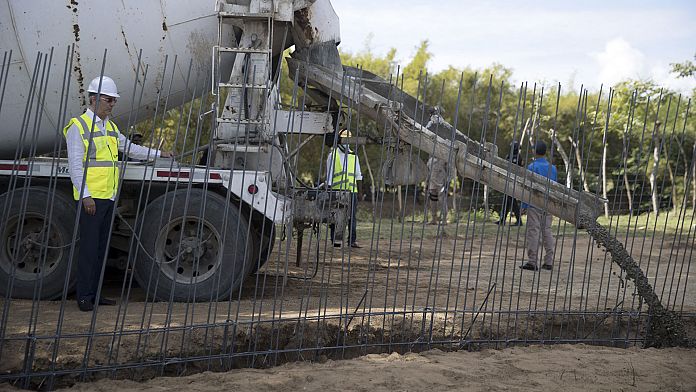 Luis Abinader himself poured the concrete. The President of the Dominican Republic launched this Sunday with great fanfare the construction of a 160 km wall along the border of his country with Haiti, a controversial project which, according to him, should help “control“illegal immigration and crime.

This barrier”will benefit both countries, since it will make it possible to control bilateral trade much more effectively, to regulate migratory flows to combat human trafficking mafias, to combat drug trafficking and illegal arms sales“, said Abinader during a ceremony in the border area of ​​Dajabon (north-west).

Elected in 2020, the president, whose fight against illegal immigration is one of the hobbyhorses, promised to build this wall a year ago. The work will cost $31 million and will last nine months.

The first stage launched on Sunday will have 54 kilometers of closing “in the most populated and sensitive areas of the border“, according to the president. A second stage will extend the wall by 110 km. The wall will thus extend over 164 of the 380 kilometers of the porous border between the two neighbors who share the island of Hispaniola.

The reinforced concrete wall on which a metal structure will be placed will be 3.90 meters high and 20 centimeters thick. There will be, the army added, 70 surveillance and control towers.

Haitian Prime Minister Ariel Henry was informed of the project during a telephone conversation with the Dominican President on February 18, according to the Haitian daily “Le Nouvelliste”.

The serious institutional and security crisis in Haiti has led its population to “a worrying situation of political and social instability, as well as an endemic economic and food crisis“, said during his speech Luis Abinader, referring to the upheavals that Haiti has been going through since the assassination of President Jovenel Moïse on July 7.

“Whenever Haiti has suffered a disaster, we Dominicans have always been the first to come to its aid. However, the Dominican Republic cannot take charge of the political and economic crisis of this country nor solve the rest of its problems.“, he said.

This crisis”must be overcome by the Haitians themselves and supported by the international community“, he added.

Migrant advocacy organizations criticize the construction of the wall, saying it will cause “xenophobia and racism“.

The mayor of Dajabon, Santiago Riveron, said he did not agree “with this type of wall“, because “the real wall is that of the economy” and corruption, accusing “soldiers to take bribes of 100 or 200 pesos (2 or 4 dollars)” by illegal immigrant.

The Dominican Republic (10.5 million inhabitants) hosts some 500,000 Haitians seeking better living conditions in the much more prosperous neighbor, according to the last Dominican National Immigrant Surveydating from 2017.